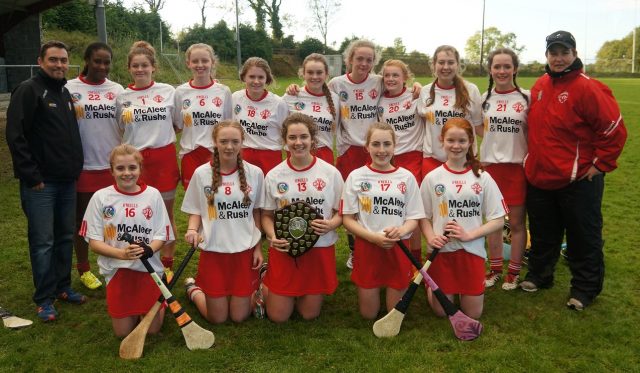 The county under 15 camogs made the long journey to father Manning Gaels,Drumlishin county Longford on Saturday to take part in the Camogie under15 championship blitz.
There were eight counties in total entered into the competitions.
After some very close games at the beginning of the competiton the young camogs soon found themselves playing in the shield semi-final against Westmeath.
They got off to a blistering start and a goals from Reagan Fay and Catherine Muldoon followed by a Rachel O’Neill point gave the red hands a half time lead Tyrone 3-1 Westmeath 0-0.
Despite the numerical advantage in the second half for Westmeath Cliodhna Goodfellow added a further point in the second half to give the Tyrone girls a well deserved victory.
Donegal was up next in the shield final and even though they had a player advantage from the start the game was even as they drew at half time Tyrone 1-3 Donegal 2-0.
The Tyrone girls were running on empty but despite this they dug deep and came away with the shield with a score-line Tyrone 2-7 Donegal 2-2.
Pat Martin, Vice President of the camogie association presented joint captains line Nèamhann Nì Dhonnghaile and Catherine Muldoon with the winning shield and medals.
Tyrone combined Blitz scorers
Reagan Fay 5-13 Catherine Muldoon 5-9 Franchine Farley 1-2 Cliodhna Goodfellow 0-2 Rachel O’Neill 0-1
The Tyrone county board would like to thank the Camogie Association and the organisers on the day, Caroline Murray and Lizzie McGuinness.
Martin Donnelly 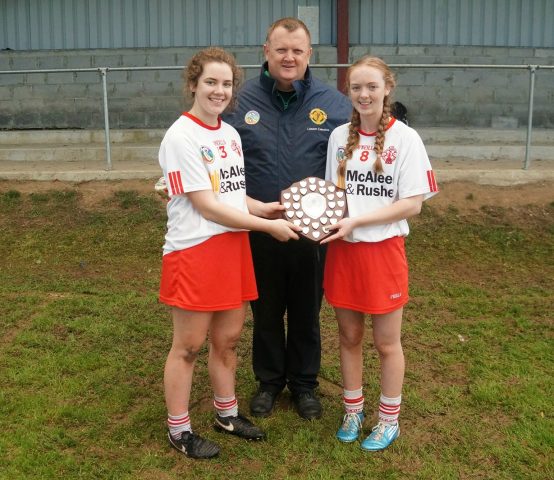