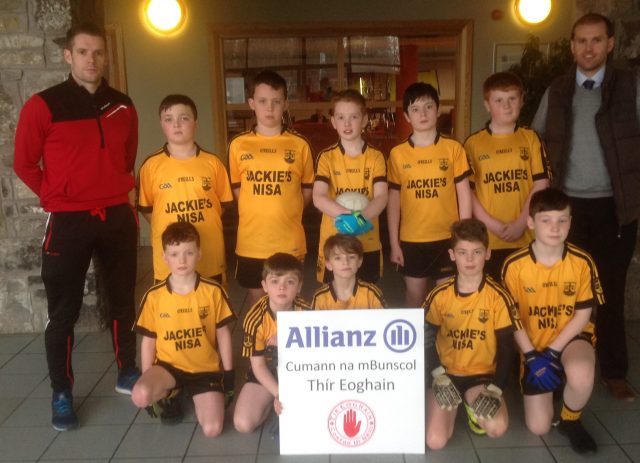 Allianz Cumann na mBunscol, Thír Eoghain, served up yet another top-class display when Heat 3 was held in the Station Centre, Omagh. Loughmacrory, as defending champions, had their Tyrone and Ulster titles on the line. Could they retain them…?
Ten schools were drawn into two sections. Section ‘A’ contained: Christ The King P.S. Strathroy; Recarson P.S; All Saints’ P.S. Tattysallagh; St. Teresa’s P.S. Loughmacrory and St. Mary’s P.S. Killyclogher. The teams from All Saints, Christ The King and Recarson P.S. all played some fabulous football. However, they all just missed out on a semi-final berth. This was due, in no small matter, to the fact that one team – a well-drilled Loughmacrory – won all four of their group games. This 100% win-record ensured that St. Teresa’s P.S. booked a deserved place in the Semi-final, where they would be joined by St. Mary’s P.S. Killyclogher.
Section ‘B’ comprised 2014 Champions, St. Patrick’s P.S. Newtownstewart; Our Lady of Lourdes P.S. Greencastle; Gaelscoil Uí Dhochartaigh, Strabane, Gaelscoil na gCrann and St. Scire’s P.S. Trillick. Again, these schools produced some terrific football but Newtownstewart, Greencastle and Gaelscoil na gCrann would all be denied a semi-final spot. The reason for this turn of events came mainly in the form of a formidable St. Scire’s P.S. Trillick – who emulated the Loughmacrory lads by winning all four of their group games, whilst Gaelscoil Uí Dhochartaigh finished section Runners-Up.
The scene was now set for our first semi-final between Gaelscoil Strabane and Loughmacrory. The latter seemed to click into gear and recorded a comfortable win over a gallant Gaelscoil.
The second semi served-up a 7-goal thriller, with the Trillick and Killyclogher teams locked in an absolute belter of a semi-final. It took a last-gasp winner to seal victory for the Killyclogher lads over a heartbroken Trillick side – led by a proud Master Brendan King.
The final would see Tyrone legend Stephen O’ Neill lead Killyclogher to take on Mark McCullagh and Mickey Gallagher’s Loughmacrory – our 2016 Champions. The Killyclogher boys gave it their all but encountered a skilled opponent. St. Mary’s P.S. deserve huge credit for playing their part in a tremendous competition. They can be very proud of themselves. The same applies to the victors, Loughmacrory, who will have two very satisfied (and no doubt relieved) teachers leading their charges to the county final in Cookstown next month. We wish St. Teresa’s P.S – our current Champions – all the very best in their bid to defend both titles!
Finally, thanks to Stephen McNamee for his expert officiating as referee, and to Damian Kelly and Eddie Doris (Allianz Cumann na mBunscol, Thír Eoghain) for ensuring the smooth running of this great event. To Omagh Station Centre’s friendly staff our sincere thanks. We do it all again tomorrow. Class! 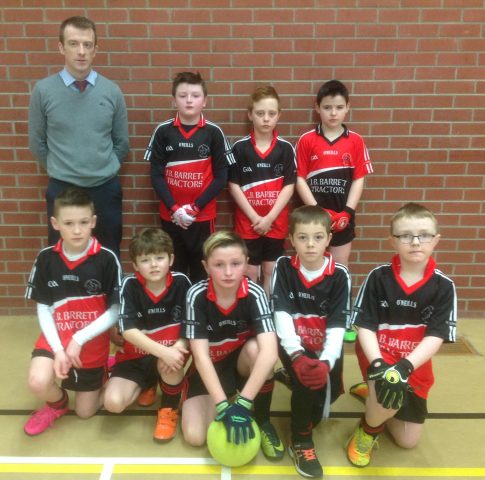 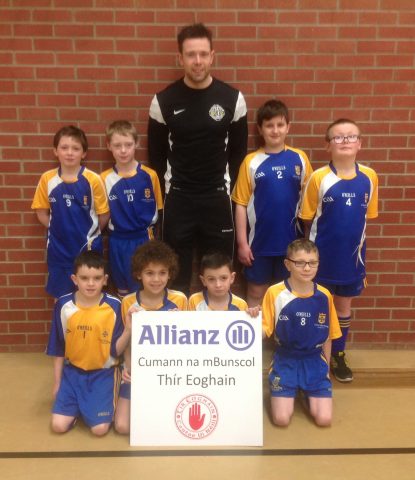 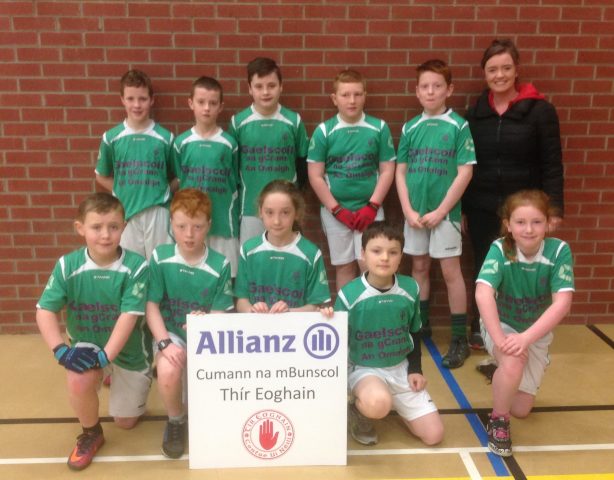 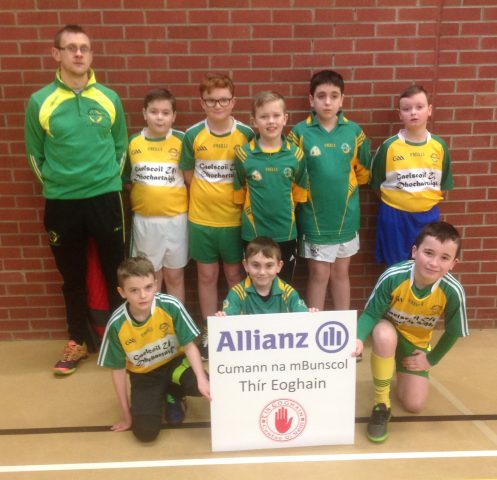 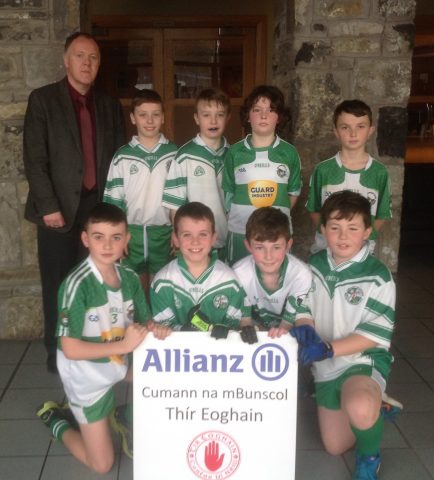 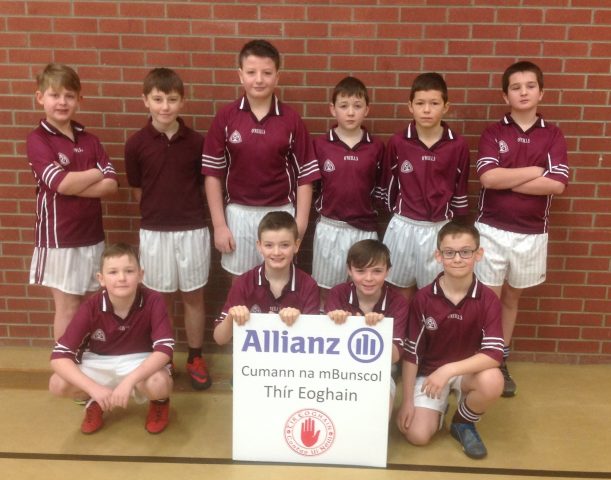 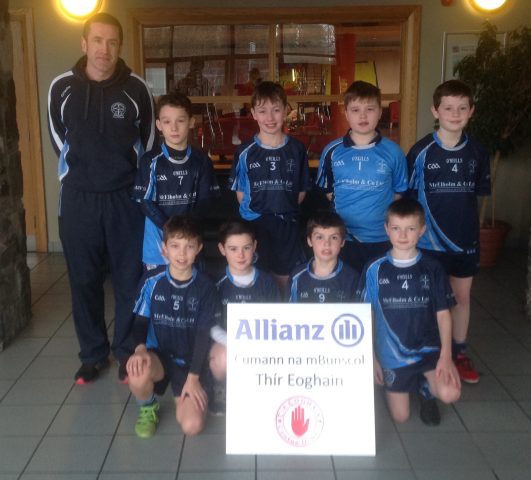 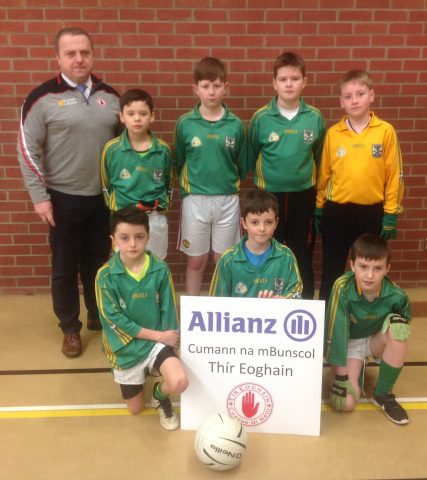 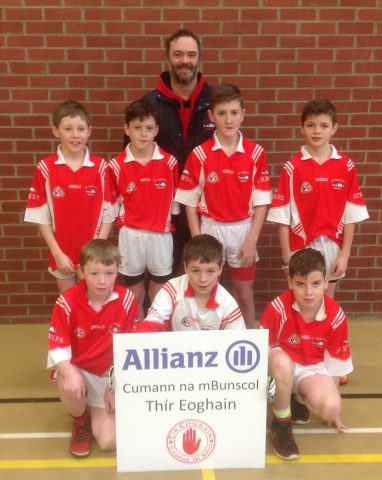