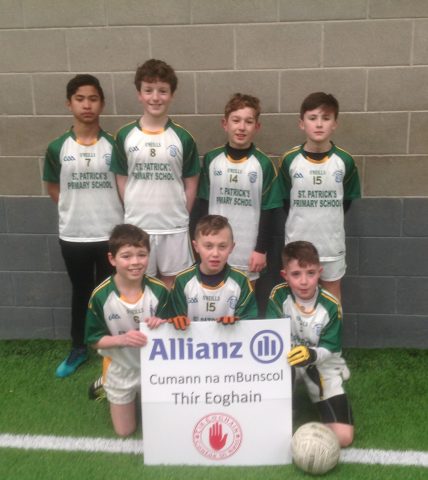 The sixth and final heat of the annual Allianz Cumann na mBunscol 5-a-side Boys’ Indoor Gaelic Football for primary schools was held today in Dungannon’s Loughview Centre. Eleven local schools entered teams for this qualifying heat, which produced a tremendously high level of skill and sportsmanship from all involved.
Day 6 of the heats, Wednesday 8 February, saw the 11 schools compete for a coveted place in the Tyrone Final. The format of the day’s play was based on two sections (A & B) of 6 and 5 school teams, respectively. Great praise must go to the teams from St. Brigid’s P.S. Altamuskin; Derrylatinee P.S.; St. Mary’s P.S. Ballygawley; Aughnacloy St. Mary’s P.S; St. Macartan’s P.S, Clogher and St. Joseph’s P.S. Caledon – all of whom battled gallantly in competition, but fell just short of qualifying for the semi-finals despite their valiant efforts. These players were extremely worthy representatives of their schools and local clubs. A special mention to Blessed Patrick O’ Loughran P.S. Castlecaulfield who missed out on a semi-final place by only one point. Hard luck, lads!
Section ‘A’ saw Master Declan Muldoon’s talented St. Patrick’s P.S. Dungannon team, secure top spot – with 5 wins out of 5 – and an automatic place in the heat finals. Meanwhile, Mrs. Gemma Quinn guided her St. Patrick’s P.S, Aughadarragh through as section runners-up, notching-up 4 impressive wins.
Section ‘B’ was proving trickier to negotiate and had to go down to the last league game to determine the outcome. The St. Mary’s P.S. Cabragh boys, under the care of Master McCreesh, recorded an impressive 3 wins and a draw to guarantee top spot in their section, with Master Brian Gormley mentoring his St. Malachy’s P.S, Glencull lads (also unbeaten with 2 wins and 2 draws) to secure the runners-up spot.
The scene was now set for the first semi-final between Dungannon and Glencull. The section ‘A’ winners (Dungannon) had their scoring boots on as they sealed a heat final berth on a 4-1 scoreline. Hard lines to a young, skilful Glencull team. What they may lack in numbers, they certainly make up for it in quality.
The second semi-final pitched section ‘B’ winners Cabragh against Aughadarragh. This was a rip-roaring encounter with goals flying in. A total of 5 goals rattled in. Unfortunately for a brave Aughadarragh team, the Cabragh boys just about got the better of them on a 3-2 scoreline. Nevertheless, despite not having the biggest enrolment numbers, St. Patrick’s P.S. Aughadarragh continue to punch above their weight.
The level of expectation and anticipation was high as our sectional winners prepared to do battle. The game itself lived up to all pre-match expectations. Both teams played some tremendous football and displayed a full-blooded effort. However, it wasn’t quite to be for the Cabragh lads, despite giving their all. An impressive performance by the Dungannon boys drove their team on to ultimate victory after a pulsating final.
St Patrick’s PS, Dungannon, now proceed to the Allianz Cumann na mBunscol Tyrone Indoor Football Boys’ Final to be held in Cookstown’s MUSA next month. We congratulate these talented boys and wish them well as they prepare to face the qualifying schools from previous heats held in Omagh, Cookstown and Clonoe.
Our thanks to Tyrone referee Sean McCartan for his expert officiating, and to Allianz Cumann na mBunscol officers: Patrick McGivern, Eddie Doris and Damian Kelly for co-ordinating the day’s matches. A final word of thanks must go to Joe McAree at the Loughview Centre.
Go raibh maith agaibh go léir! 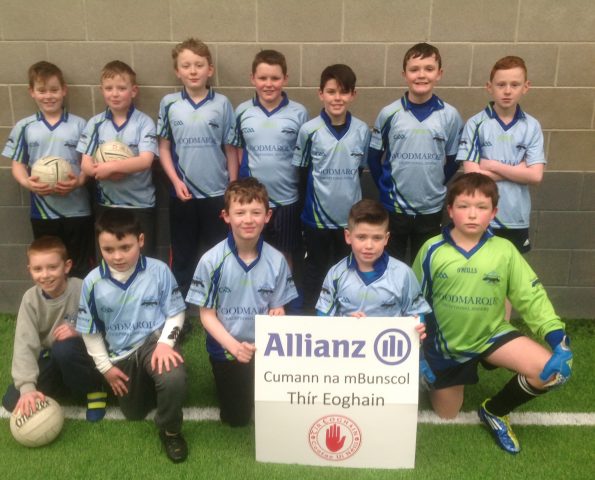 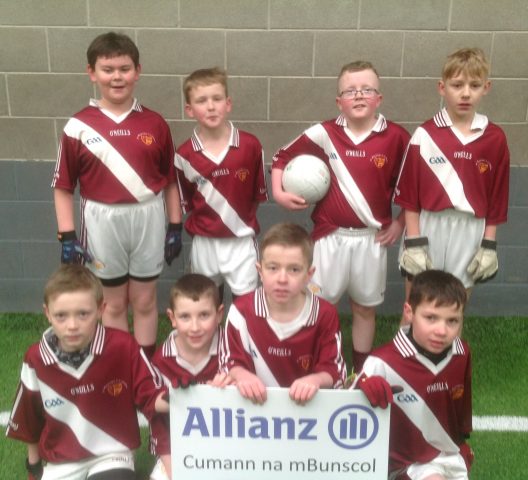 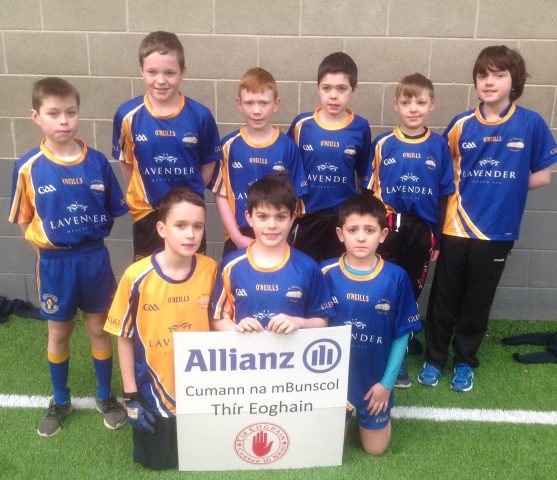 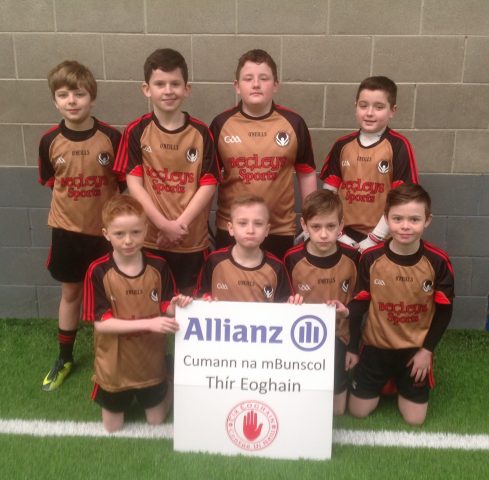 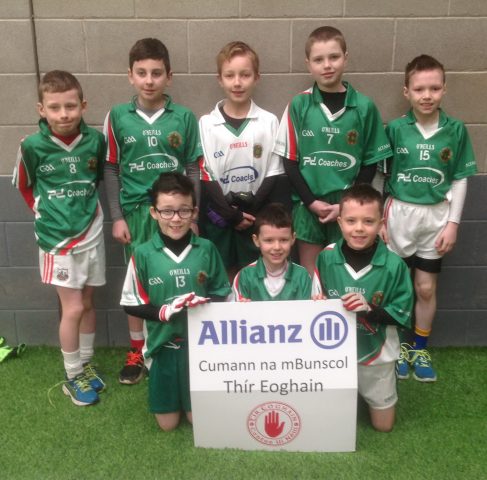 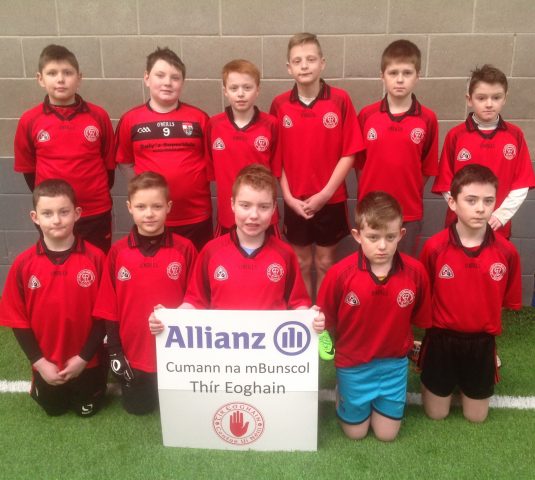 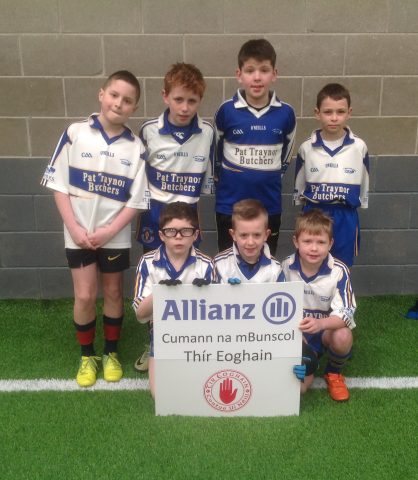 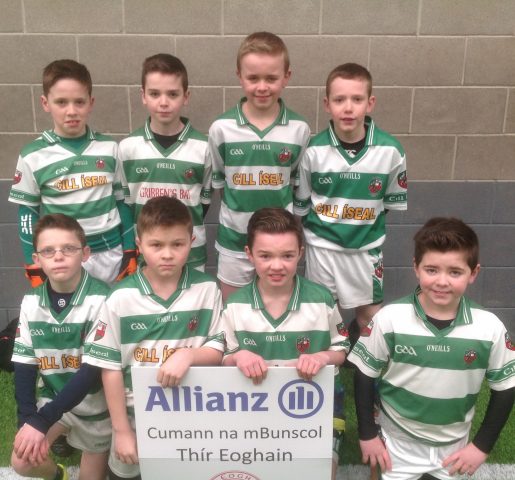 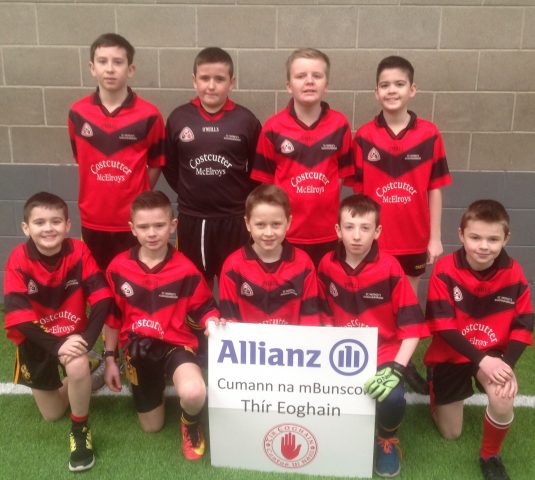