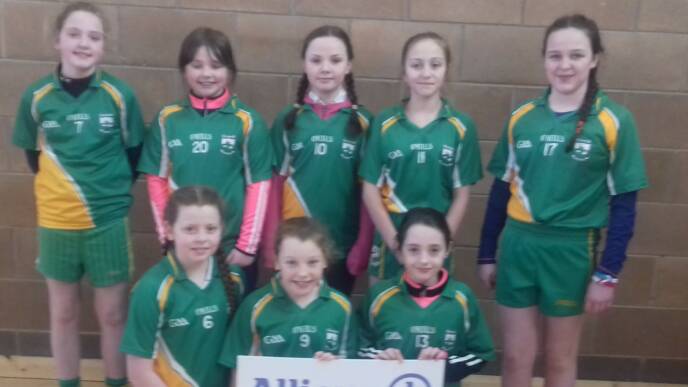 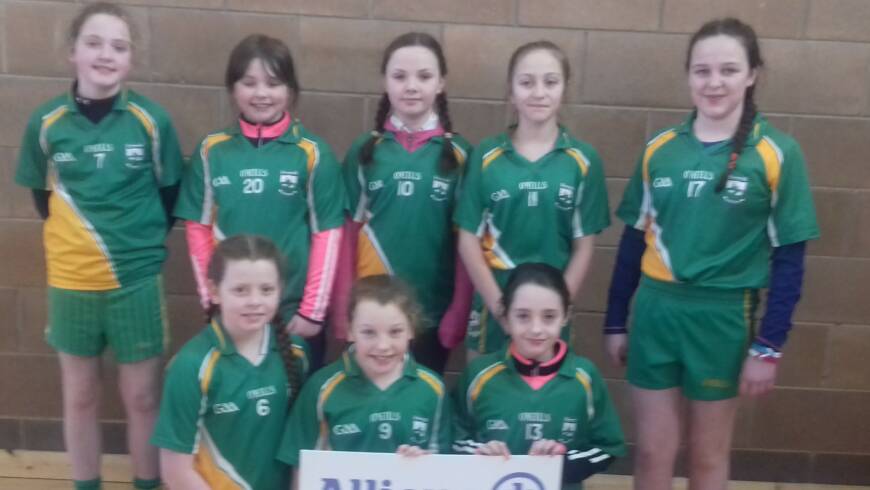 Allianz Cumann na mBunscol Thir Eoghain held the fourth of six scheduled heats of the annual 5-a-side Girls’ Indoor Gaelic Football for Tyrone primary schools today in Clonoe Indoor Centre. A total of 9 local schools competed for the honour of winning this heat. The format of the day’s play saw the teams being drawn into two sections. As was the case in previous heats held this week, an extremely high level of skill and sporting behaviour was exhibited from all involved.
Section ‘A’ comprised 5 teams – with each school having four games to play against each other. Holy Family P.S. Aughamullan P.S; St. Brigid’s P.S. Brocagh, and St. John’s P.S. Kingsisland gave of their best on the day and put on good displays, doing themselves proud in the process. Indeed, the girls from Kingsisland recorded 2 fine wins, and were unlucky to just miss out on qualifying. It was the other two schools in the section who would figure in the shake-up for heat final qualification. Edendork P.S. and Gaelscoil Uí Néill, Cluain Eo, both went unbeaten in the section. An múinteoir, Páraic Martin, saw his charges record an impressive 3 wins and a draw. Thus, their place in the semi-final was secured. This scenario was replicated by Mrs A. McAlinden’s talented Edendork girls. Maith sibh! More about them later…
Section ‘B’ contained St. John’s P.S. Moy and St. Patrick’s P.S. Annaghmore. These teams gave it everything in their quest to reach the final. We witnessed tackling, passing, saving, soloing and shooting of the highest order – as, indeed, we did in the other section. Registering 2 good wins, St. Patrick’s Roan, Eglish (led by Stephen Mone and James Grimley) made the semi-finals, but they couldn’t get the better of Primate Dixon P.S. Coalisland. The ‘island girls were on top form as they cruised their way to the semi-final with a 100% win record (3 wins from 3). Mrs. Roisin McGivern’s and her girls were delighted – and rightly so.
Our First semi was a goal fest as Edendork and Eglish slugged it out in a 6-goal thriller. Unluckily for Eglish, it was Edendork who prevailed 4-2 to seal their final berth. Our second semi also produced a hatful of goals in what was a local derby. A 5-goal epic ensued with the honours going to Primate Dixon 3-2 over a brave challenge from Gaelscoil Uí Néill.
The scene was now set for our heat final between Edendork P.S. and Primate Dixon P.S. Remember, each of our finalists were defending unblemished records. The sense of anticipation was building as the referee threw the ball in…
Play ebbed and flowed as both teams expended every ounce of energy to get the upper hand. Try as they may, the brave Coalisland girls couldn’t respond to an early Edendork goal blitz. However, the PDPS girls had a great tournament and look to be a team for the future.
Jubilant scenes greeted the final whistle as a proud Mrs Anne McAlinden saw Edendork clinch a 3-1 victory and, more importantly, a place in the county final next month in Cookstown’s MUSA Indoor Arena. Comhghairdeas agus maith sibh go léir!
We congratulate these talented girls and wish them well as they join the other qualifying schools from heats in Cookstown, Dungannon and Omagh.
Finally, we extend our gratitude to Martin Devlin (Referee) for his expert officiating. Patrick McGivern (Cathaoirleach Uladh Cumann na mBunscol) is also thanked for helping ensure the successful running of this event.
What a wonderful day’s football – bring on the county final! 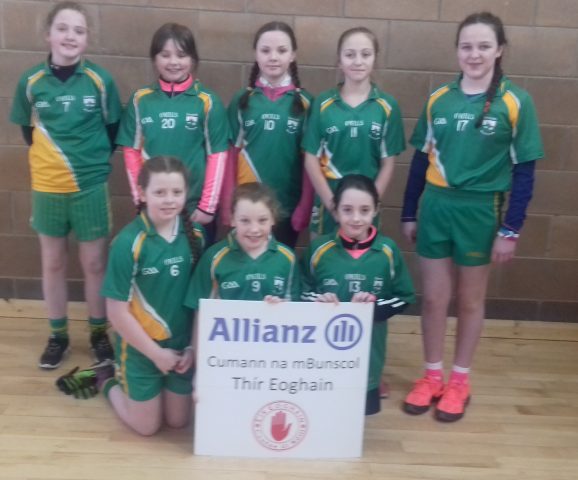 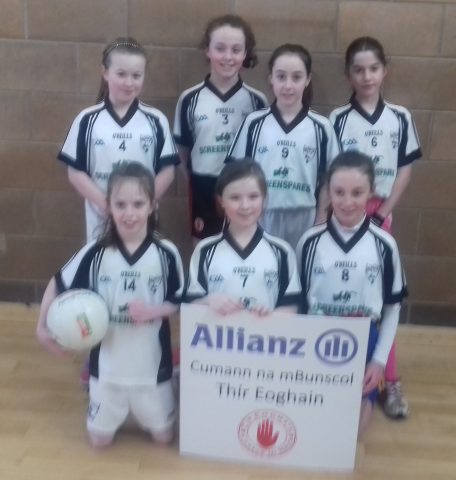 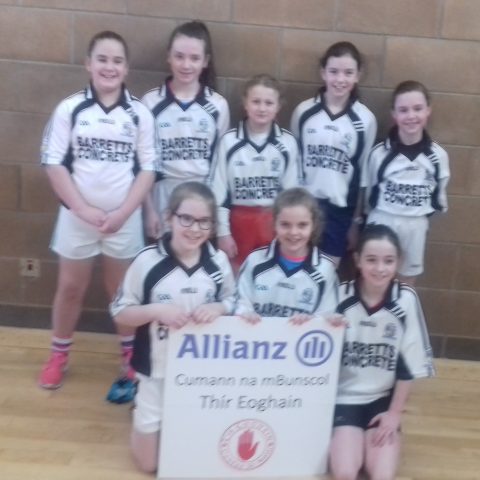 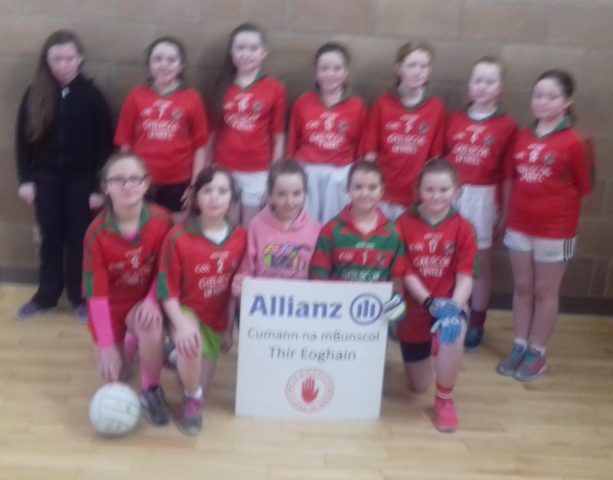 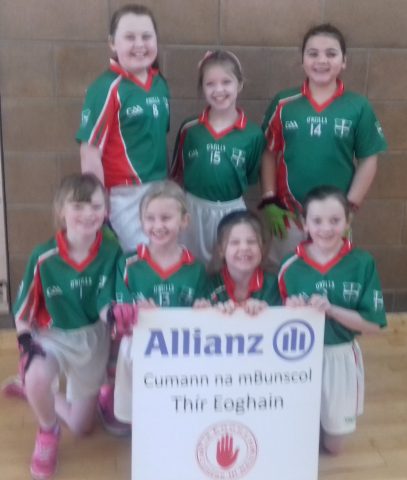 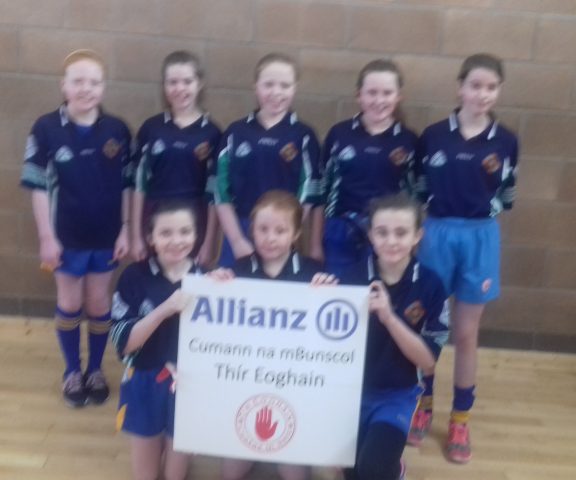 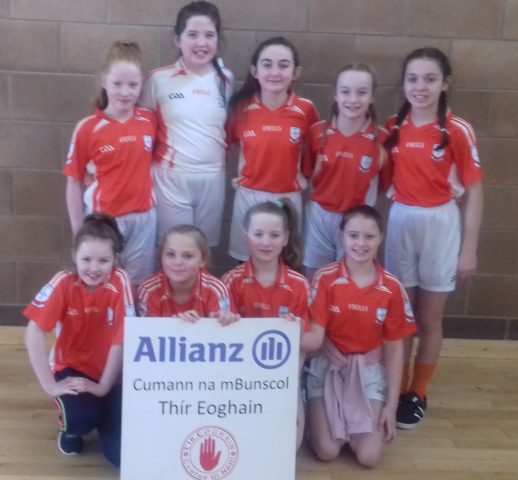 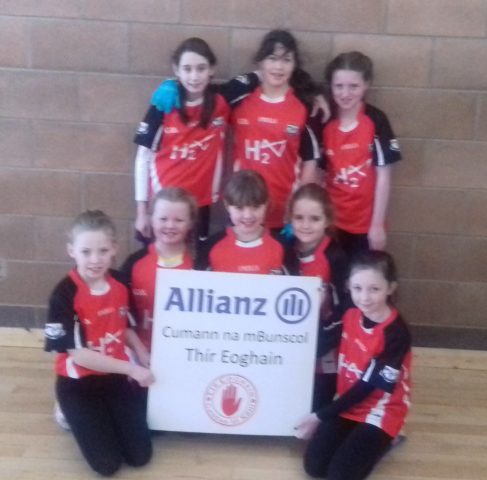 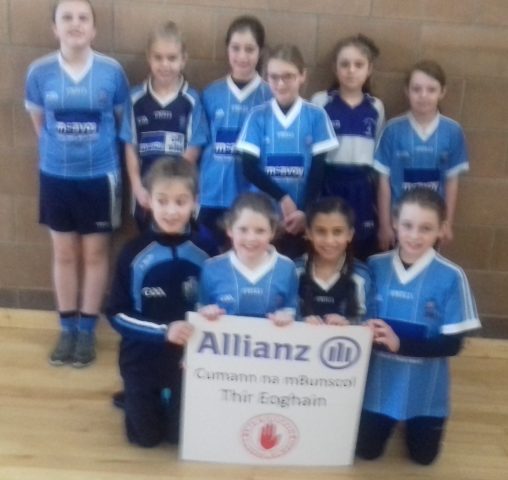