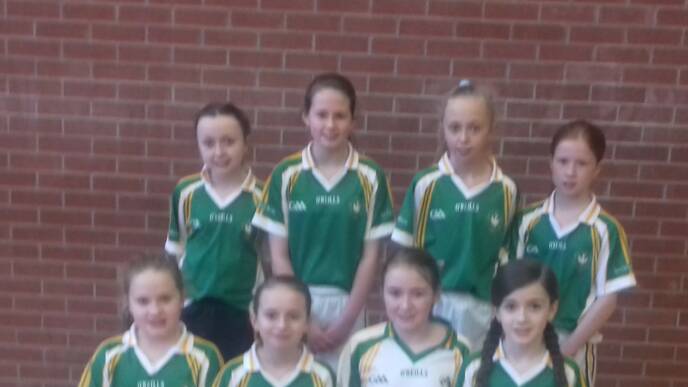 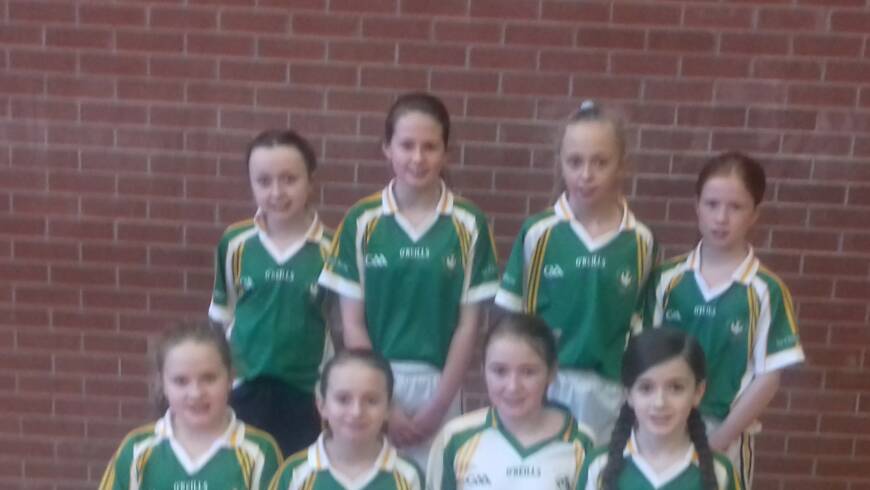 Allianz Cumann na mBunscol Thír Eoghain today held the penultimate heat of six scheduled heats of the annual 5-a-side Girls’ Indoor Gaelic Football for Tyrone primary schools in Omagh’s Station Centre. A total of 8 schools competed for the honour of winning this particular heat. The format of the day’s play saw the 8 team captains select a number to draw their schools into two sections. As was the case in the previous four heats, an extremely high level of skill and sporting behaviour was exhibited from all involved.
Section ‘A’ contained teams from St. Mary’s P.S. Killyclogher and St. Patrick’s P.S. Castlederg. Both teams played their hearts out before falling just short of qualifying. Meanwhile, a powerful St. Dympna’s P.S. Dromore side romped to three consecutive wins to top the group and seal a semi-final place. They were followed into the semi-finals by St. Conor’s P.S. Omagh – who had narrowly pipped the Castlederg girls. Hard luck to the ‘derg team, but well done Omagh St. Conor’s.
Section ‘B’ comprised two Strabane teams: St. Catherine’s P.S. and their St. Mary’s P.S. counterparts. Despite both schools playing some terrific football, their efforts would ultimately go unrewarded. This was due in no small part to the endeavours of St. Colmcille’s P.S. Carrickmore and Holy Family P.S. Omagh. Indeed, when these two sides met in the group game, they served-up a thrilling 4-4 goal-fest. Both schools amassed 5 points to seal a semi-final spot.
The first semi-final pitched the 100% win record Section ‘A’ winners (St. Dympna’s P.S. Dromore) against the ‘B’ runners-up (Holy Family P.S. Omagh). Unfortunately for Dromore, they ran into an inspired Omagh side who recorded an impressive 2-0 victory, thus securing themselves a place in the heat final. Commiserations to a gallant St. Dympna’s P.S. team, as they had played brilliantly all day and had a terrific tournament!
The second semi-final saw Section ‘B’ winners (Carrickmore) come up against the ‘A’ runners-up: St. Conor’s P.S. Omagh. The St. Conor’s girls, to their credit, threw everything at it but a strong St. Colmcille’s P.S. registered a deserved win to book their place in the heat final. Hard luck to St. Conor’s P.S. – you had a wonderful tournament. Your mentor, Master Paul Logue, was very proud.
The final between Omagh and Carrickmore was eagerly anticipated, as both schools were unbeaten thus far. The result earlier in the group stages between these two was a 4-4 draw, and this final followed a similarly close path as, when the referee sounded the final whistle, the game finished 2-1. A pride-filled Donna McSorley watched as her heroic Holy Family P.S. team had given everything and she couldn’t have asked anything more from her talented team. However, on this occasion, they were to be denied. Well played, girls – a team worth watching come the outdoor leagues, no doubt!
Master Emmet O’ Neill, on the other hand, was delighted as his Carmen girls clinched victory and, more importantly, a place in the county final next month in Cookstown’s MUSA. Comhghairdeas agus maith sibh go léir! We congratulate these talented girls and wish St. Colmcille’s P.S. well as they await the qualifying schools from the other heats.
Our sincere thanks to referee Brian McGinn for his expert officiating, and to Allianz Cumann na mBunscol Cathaoirleach Uladh, Patrick McGivern, for co-ordinating the day’s matches. A final word of thanks must go to the friendly staff at the Station Centre for their hospitality this week.
That’s five of the six county final berths safely filled – bring on the final one… 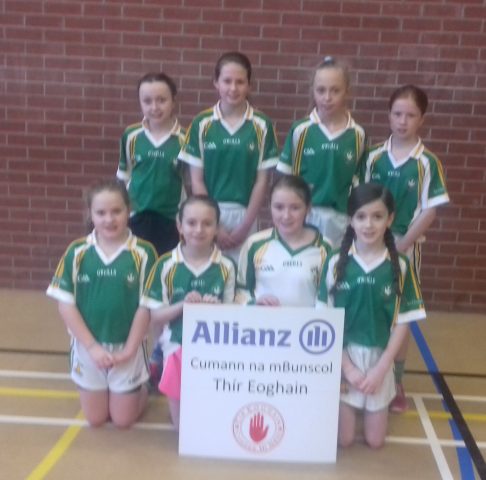 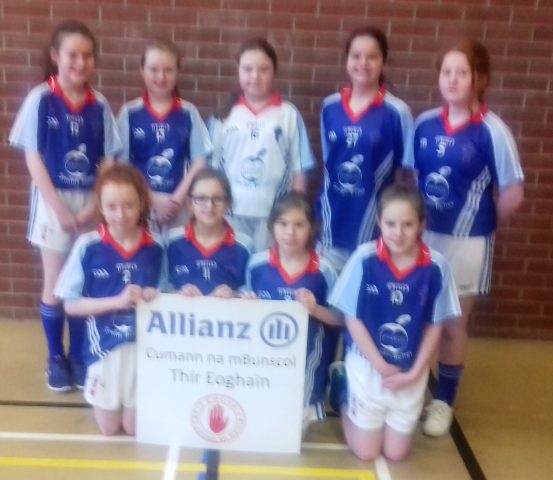 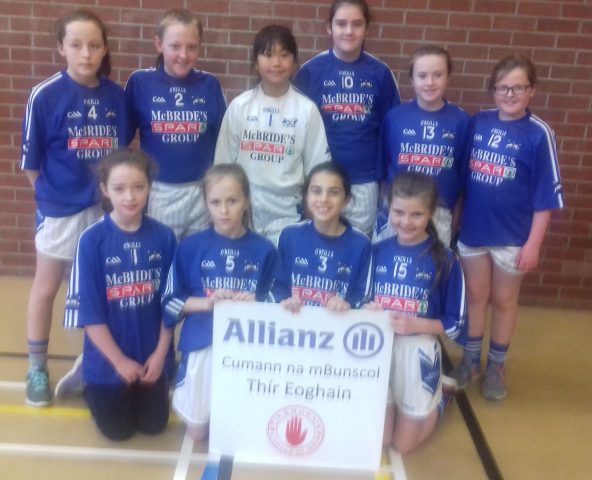 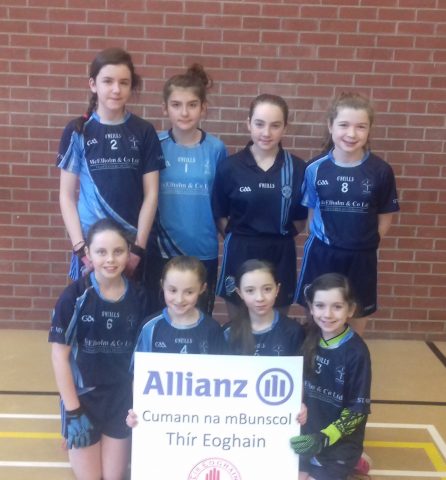 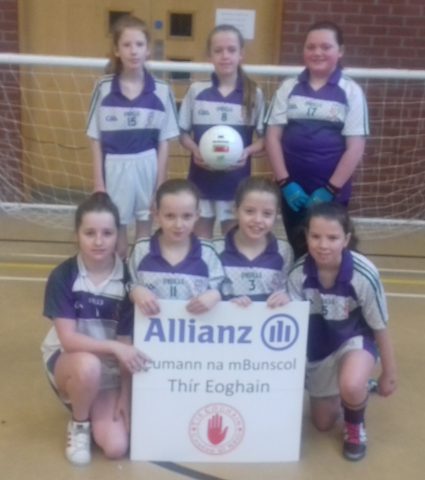 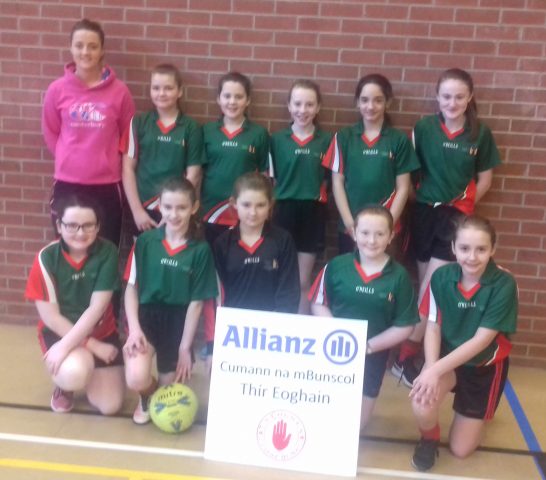 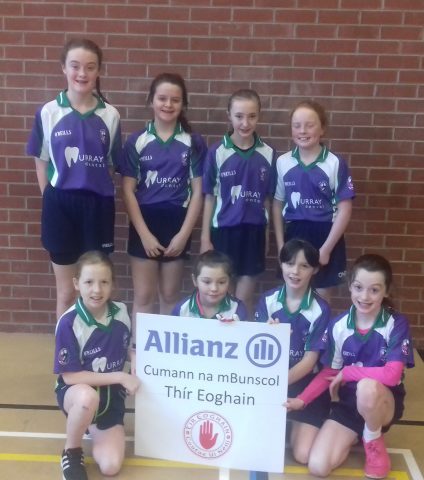 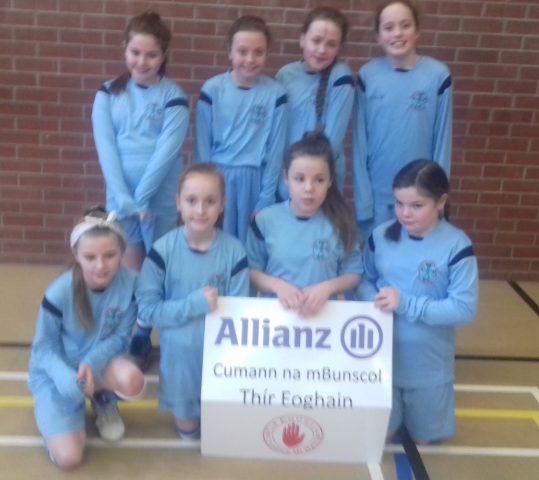