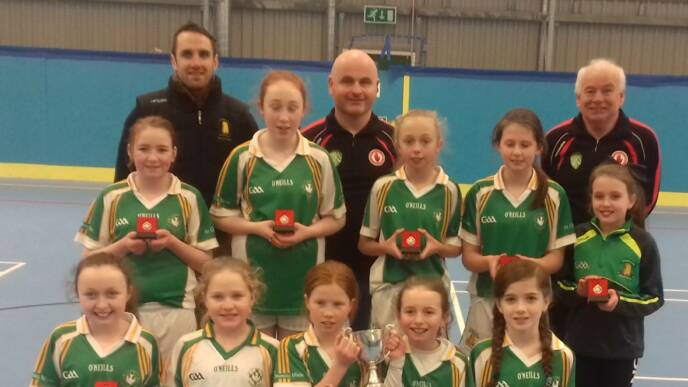 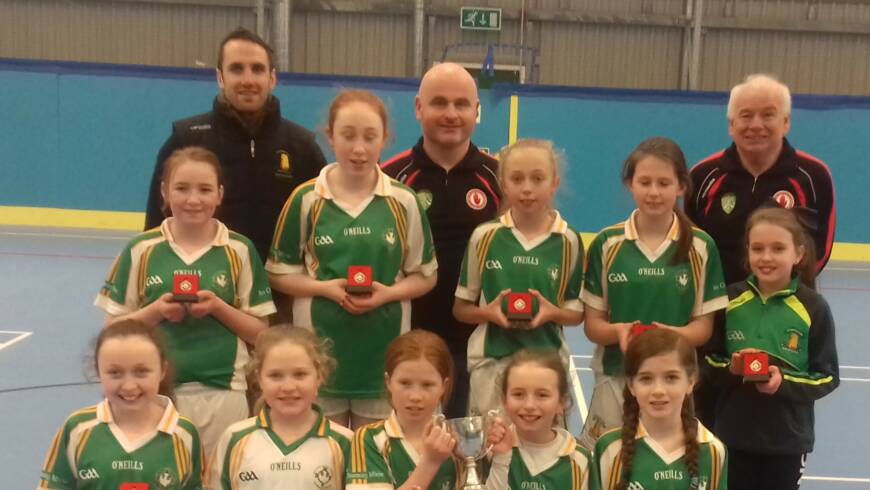 Amidst much excitement, Allianz Cumann na mBunscol Thír Eoghain held their annual Girls’ 5-a-side Indoor Football Tyrone Final today, Friday 3 March, in Cookstown’s superb MUSA Indoor Arena. Six schools from across the county had each won their respective heats, paving the way for their Tyrone Final appearance. The question on everyone’s lips was: Who would capture the prestigious trophy to be crowned Tyrone Girls’ Champions 2017?
The 6 team captains were invited to help make the draw. This took the format of two sections of three schools each. The girls were guaranteed a minimum of three matches in the day’s play.
Section ‘A’ contained the back-to-back winners – St. Colmcille’s P.S. Carrickmore; St. Patrick’s P.S. Newtownstewart and St. Mary’s P.S. Cabragh. This certainly was a heavy-weight section. The young Killeeshil girls tried their hearts out, and didn’t lack for skill and effort but, despite their endeavours, they were to miss out virtue of scoring difference on progressing from the section. Carrickmore recorded two wins to top the group with Newtownstewart also securing their semi-final berth when they came second in the section.
Section ‘B’ featured three more classy teams in the shape of Edendork P.S.; Clann na nGael schools, Dunamanagh and St. Patrick’s P.S. Donaghmore. Edendork bagged 3 brilliant goals in their final game before bravely bowing out from the section. Ultimately, Mrs. Anne McAlinden and Master Damien McAnespie saw their respective Edendork and Cabragh teams finish joint fifth. This is no mean achievement – to be ranked in the county’s top 5 – considering we have almost 100 primary schools in Tyrone. Maith sibh!
Meanwhile, Donaghmore girls secured top spot in the section ahead of Dunamanagh by one point on scoring difference. However, both schools progressed.
The scene was now set for our semi-finals where, first up, Carrickmore took on Clann na nGael in a tightly-contested match. However, with things in the balance, the Carmen girls pulled away in the final couple of minutes to book a place in the final. Clann na nGael would play in the 3rd place play-off.
Our second semi-final saw Donaghmore take on Newtownstewart. Goals proved crucial for NTS to reach the day’s final on 2:01 to 0:02 scoreline.
St. Patrick’s P.S. Donaghmore and Anne Daly’s Clann na nGael played-off for third. There wasn’t much between the sides but a brace of Donaghmore goals helped Mrs. Roisin Ferguson’s girls win silver county medals. Both schools played some great stuff and they can consider themselves ranked in the county’s top 4 schools for girls’ football. Wow!
The final was eagerly awaited as it featured the two schools who had gone unbeaten thus far: Newtownstewart and St. Colmcille’s P.S. Carrickmore. Newtownstewart got off to a solid start but, as befits defending champions, the Carmen girls responded in positive fashion. Some quick-fire scores proved vital in seeing-off Master Fabian McGlone’s team’s brave challenge. The talented St. Patrick’s P.S. Newtownstewart girls received gold county medals as worthy runners-up. Maith sibh go léir!
As for the victors, Masters Mark Donnelly and Emmet O’Neill and their triumphant Carrickmore girls can now bask in the glory of this tremendous accomplishment. The title of Allianz Cumann na mBunscol Tyrone Girls’ Indoor Football Champions 2017 and boxed commemorative medals is well deserved especially as it is a 3-in-a-row success. That is some achievement!
Next up for them is a tilt at the Ulster Championship title on 29 March in Magherafelt. Everyone associated with Cumann na mBunscol Thír Eoghain certainly wishes them well in their quest for further glory. Ádh mór oraibh!
A word of thanks to Allianz Cumann na mBunscol Tyrone Chairman, Brian McGurk; Secretary & PRO Eddie Doris, and committee for organising this very successful competition. Allianz CnmB Ulster Officers Mickey Quinn and Pat McGivern (Cathaoirleach Uladh) both provided invaluable assistance throughout, and conducted today’s medal and trophy presentation. Our thanks, also, to Stephen McNamee, Marty Devlin & Brian McGinn for their expert refereeing throughout the various heats. Finally, our appreciation goes to the friendly, efficient staff at MUSA.
Bring on Ulster! 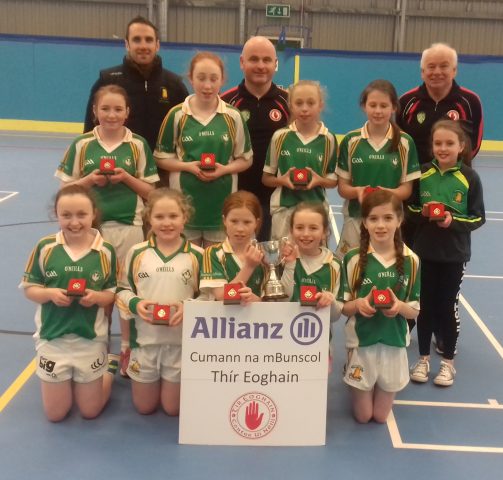 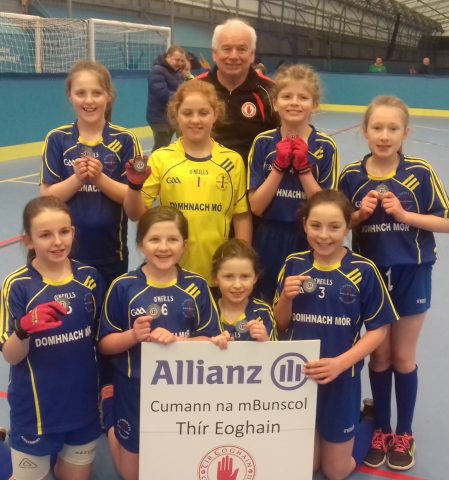 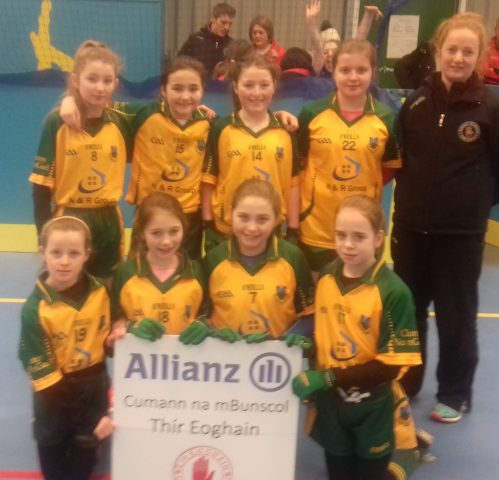 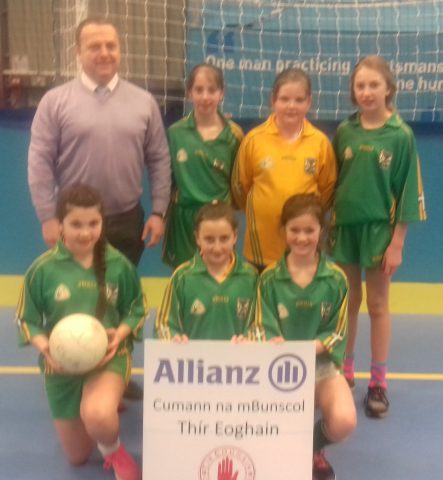 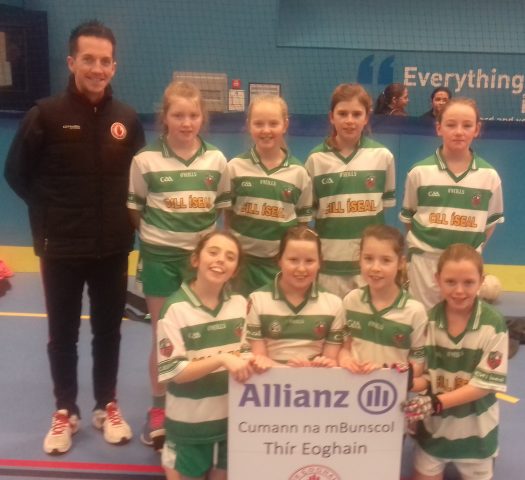 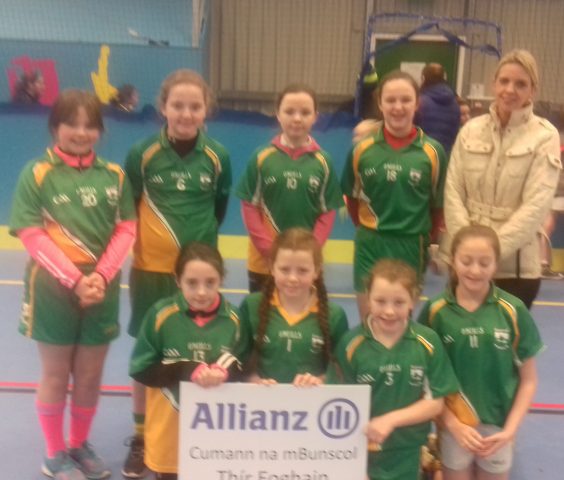 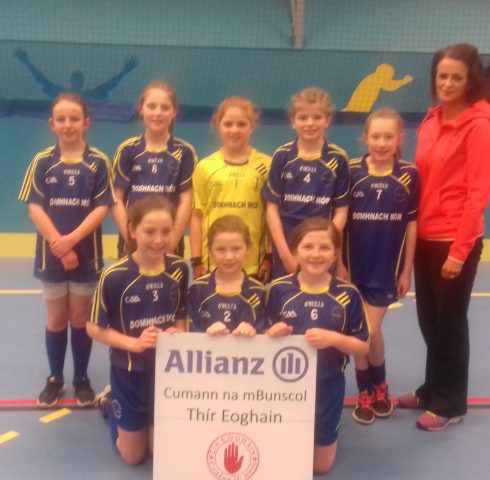 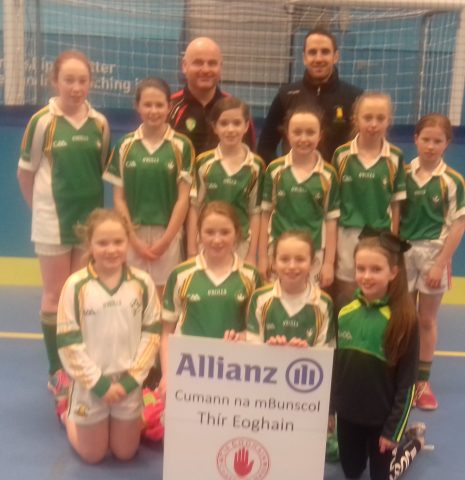 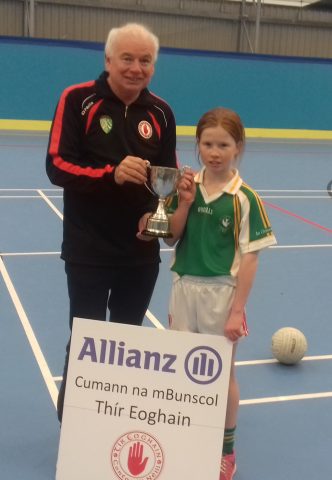