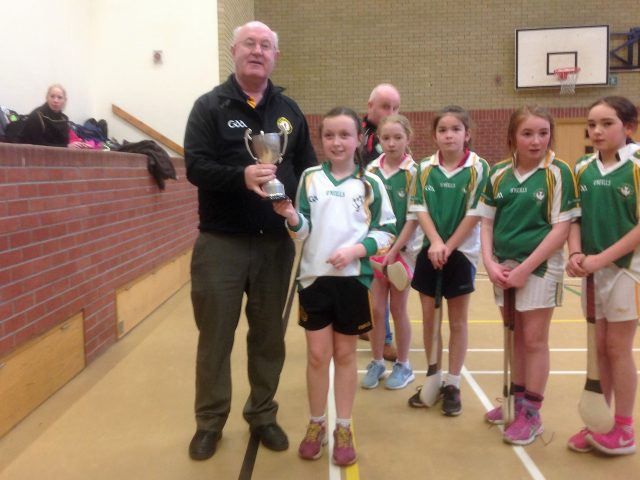 Allianz Cumann na mBunscol Thír Eoghain used the wonderful facility that is the Station Centre, Omagh, as the setting for the eagerly awaited 2017 Final of their annual Tyrone Indoor Camogie competition. Six schools from within Tyrone had qualified via their local heats, thus paving the way to this big day – one of the highlight days in the Primary School GAA calendar.
Two groups of 3 were drawn out in Section ‘A’ and ‘B’ respectively, and a highly competitive series of group matches ensued. Section ‘A’ involved teams from Recarson P.S., St. Brigid’s P.S. Brocagh and St. Patrick’s P.S, Donaghmore. The girls from Donaghmore tried their hearts out in their efforts to reach the top two that would enable progression. However, despite giving it everything, the girls from the village were to fall just short of achieving their objective. Meanwhile, Recarson girls recorded successive wins to be crowned Section ‘A’ winners and a skilful St. Brigid’s P.S. Brocagh, also progressed to the semi-finals.
Section ‘B’ was equally as competitive. This section contained teams from:
St. Patrick’s P.S Roan, Eglish (defending Champions 2016), Gaelscoil Uí Néill, Clonoe and St. Colmcille’s P.S. Carrickmore. The Gaelscoil girls left nothing in the tank with their unyielding efforts. Alas, for them, the other two schools went unbeaten in the section and made the semi-finals. Carrickmore topped the group on scoring difference with Eglish runners-up. Incidentally, the group game between these two qualifiers was one of the matches of the tournament – ending in a thrilling 1-1 draw!
Donaghmore won the 5th placed play-off by defeating a gallant Clonoe. These schools can be very proud to be ranked 5th and 6th respectively in Tyrone Indoor Camogie. It should be pointed out that both these schools contested the Hurling Final, too – superb!
The scene was now set the semi-finals.
There was plenty of drama in the first Semi-Final. However, only one goal separated the teams from Recarson and Eglish. A solitary goal proved enough for Eglish who replicated last year’s achievement by reaching the county final. The question was: Who would join the Eglish girls in the Final?
After some captivating camogie, St. Brigid’s P.S. Brocagh narrowly missed out on a final berth, with the Carmen girls edging an absorbing contest on a 3-1 scoreline. However, the Brocagh girls can be justifiably proud of their efforts. They had further hard luck when a single Recarson goal won 3rd place and silver county medals for Orla Meenagh’s girls. Not a bad start to a new principalship, Mrs Meenagh!
Therefore, the final was to be contested by Carrickmore and Roan, Eglish. Remember, both schools were undefeated thus far. The destiny of the title was up for grabs…
Both teams gave their all for victory – and the coveted crown of Camogie County Champions. You could sense the tension of the moment as both teams commenced battle. Things were going to be tight and hard won. The Carmen girls seemed to find another gear, and this proved decisive in securing for them ultimate glory in the final on a 3-0 scoreline.
It was a second-placed finish for Eglish, and the satisfaction for Master Mone and his girls of being in the top two Indoor camogie school teams in Tyrone. It’s worth noting that St. Patrick’s P.S. Eglish narrowly missed out on the double, with their boys having captured the hurling title the day before.
Master Emmet O’ Neill, meanwhile, had steered his gifted charges to the top – he was a proud man. These talented girls from St. Colmcille’s P.S. Carrickmore were duly crowned Allianz Cumann na mBunscol Indoor Camogie Tyrone Champions 2017!
A special word of thanks goes to all accompanying teachers and team mentors.
Our appreciation also goes to our referee, Declan Sherlock, for his expert officiating and to Anne Daly for her invaluable assistance throughout our series of heats. To our Allianz Cumann na mBunscol Thír Eoghain officers Eddie Doris (Rúnaí) and Pat McGivern (Uladh CnmB Cathaoirleach) a word of thanks.
St. Colmcille’s P.S. Carrickmore: Maith sibh go léir! They now have the honour of representing Tyrone in the Ulster Finals. We wish them well.
A truly memorable day for all involved. Comhghairdeas! 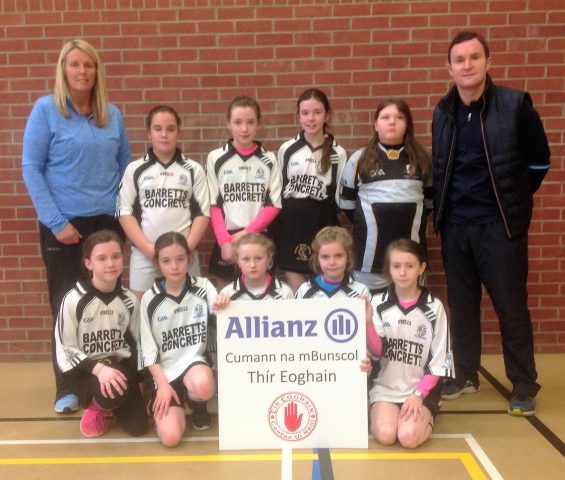 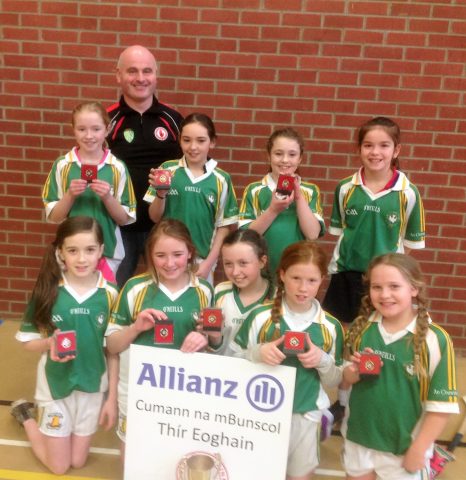 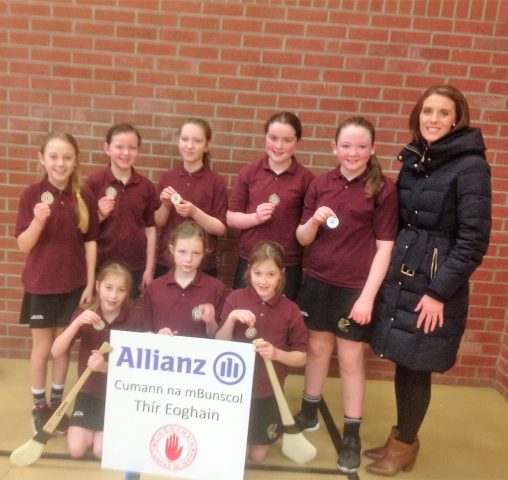 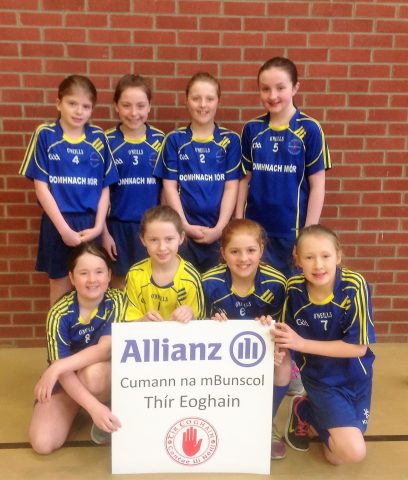 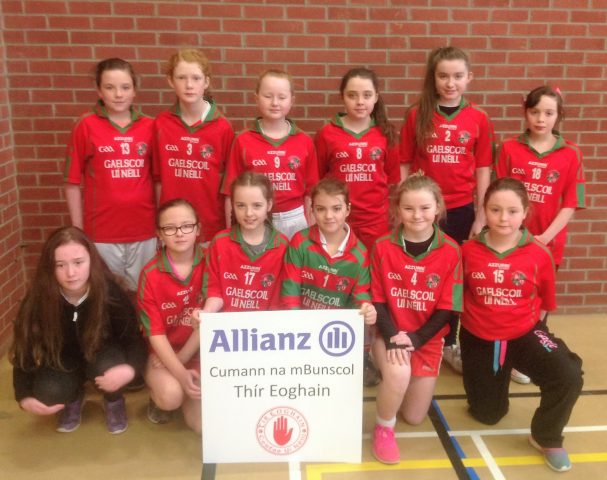 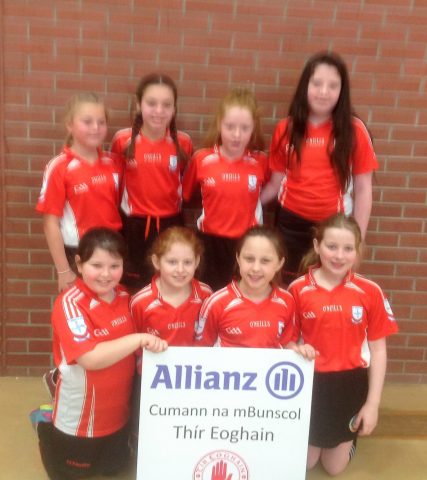