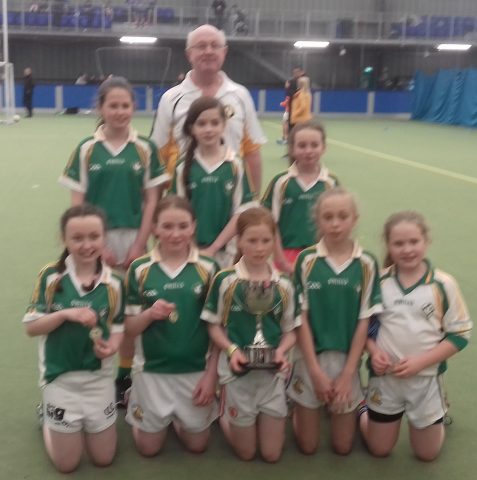 Allianz Cumann na mBunscol Uladh held their eagerly awaited showpiece Ulster Football Finals for Girls and Boys in the magnificent Meadowbank Sports Arena, Magherafelt, Co. Derry. Two new trophies – in memory of Ulster CnmB stalwarts – were up for grabs: The Malachy McGeeney Cup and Nicholas Baxter Cup. Schools from right across the province sent their respective county champions to do battle in an attempt to capture the coveted Ulster title in each code. Tyrone had two representatives going in as county champions – Carrickmore girls and Loughmacrory boys. Remarkably for Tyrone, both schools were also defending Ulster Champions. Hopes were high that these two talented teams could put up a good showing of their undoubted skills.
First up, the girls from St. Colmcille’s P.S. Carrickmore (back-to-back Ulster Champions 2015 & 2016) found themselves in a section that included the champions from Derry, Donegal and Antrim. Their title defence got off to the best possible start when they beat Millquarter P.S. Toome 4:4 to 1:0 and Buncrana, Donegal 3:2 to 0:1. A draw with New Row P.S. Castledawson secured a semi-final berth – as group winners. The Carmen girls encountered Killesher (Fermanagh) and they emerged victorious on a 2:04 to 1:01 scoreline to reach another Ulster Final. Here they would meet the formidable challenge of the Armagh champions: CBS P.S. This game would have everything, as befits an Ulster Final, including goals and points galore.
After an absorbing encounter, it was literally score for score until the final whistle. However, ultimately, it was the Carrickmore girls who showed their renowned battling qualities to capture the prestigious Malachy McGeeney Cup on a scoreline of 4:05 to 3:02. Thus, the Tyrone Champions had achieved a truly remarkable third in-a-row Ulster Championship title. The inaugural Malachy McGeeney Cup is going to a good home.
Whilst this is a squad success, many observers from the other counties remarked that one girl in particular was simply unstoppable: Sorcha Gormley – a scoring sensation! Huge credit must go these Carmen girls, and team mentors Emmet O’ Neil, Mark Donnelly and Sarah McElroy, on their continued success story. St. Colmcille’s P.S. Carrickmore are a credit to themselves, their families, school, club and county.
Squad members:
1. Caoimhe Coyle
2. Róise Kerr
3. Sorcha Gormley (c)
4. Áine Grimes
5. Niamh Allison
6. Máire Kerr
7. Emma Fox
8. Sarah O’Gara
Maith sibh go léir!
Next on the agenda was the Boys’ Football Final and the turn of the Loughmacrory lads from St. Teresa’s P.S. – our defending champions! The draw saw them paired with the champions from Derry, Donegal and Antrim – just like the girls’ draw. With no sign of Ulster Final nerves, the St. Teresa’s lads swept all before them in their group. They defeated Bunscoil Phobal Feirste, Belfast, 1:3 to 0:2, Glenswilly N.S. Donegal 3:1 to 1:2 and Mayogall, Lavey 4:1 to 1:3.
In the semi-final, Loughmacrory would meet a hitherto unbeaten CBS (Armagh) side. Another power-packed performance saw the boys from St. Teresa’s carve out a convincing 3:04 to 0:05 success in an emphatic victory. Sights were now set on another Ulster final.
Loughmacrory would meet the County Down champions: Burren P.S. The question was, could they emulate what they had done last year? Seven minutes of non-stop helter-skelter football would reveal the answer…
A proverbial ding-dong of a final ensued with goals and points aplenty. As the final whistle sounded, the final scoreline read 3:01 to 0:03 in favour of the Loughmacrory lads from St. Teresa’s P.S. This was undoubtedly a squad achievement but a special mention to goal-scoring maestros Eoin Donaghy and Ruairi McCullagh. Parents, club officials and team mentors Mark McCullagh and Mickey Gallagher savoured the moment, basking in the glory of a glorious back-to-back Ulster triumph. This is the stuff of dreams, but it is now a reality.
Squad members:
1. Thomas Duff
2. Padraig McDonald
3. Eóin Donaghy
4. Ruairí McCullagh
5. Enda Donaghy
6. Mark McDermott
7. Odhran Kelly
8. Padraig Fox
Maith sibh go léir!
Thanks to Allianz Cumann na mBunscol Doire for hosting today’s terrific event. Kevin Toner and Peter Donnelly certainly run a terrific tournament. Our appreciation also to referees, umpires and Ulster officials for their efforts. Finally, congratulations to our triumphant teams from Carrickmore and Loughmacrory. You are worthy Ulster Champions and tremendous ambassadors for the O’ Neill county. Days like this are to be cherished and will live long in the collective memories of these young stars from the proud parish of Termon. Enjoy your terrific achievement. Tír Eoghain abú! 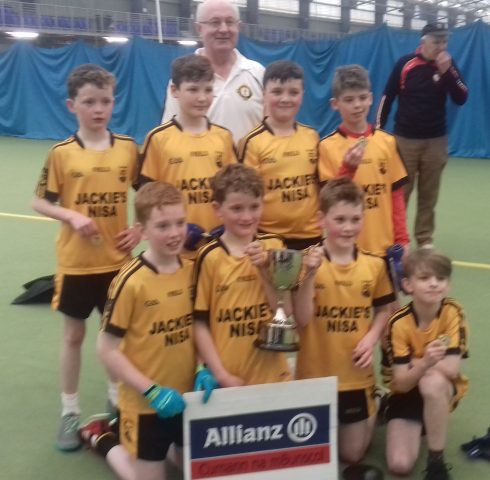 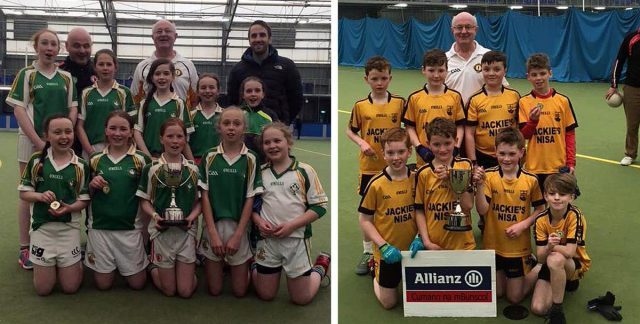 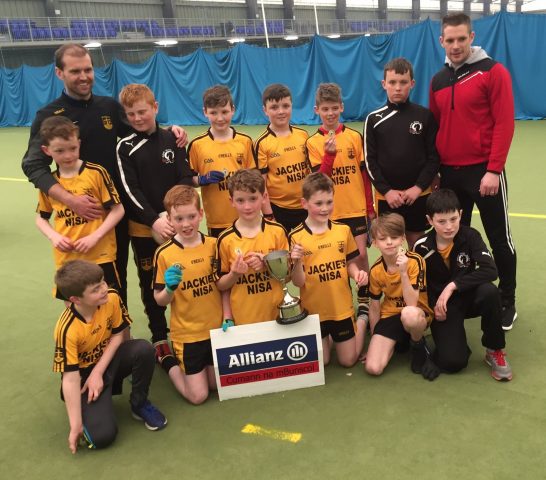