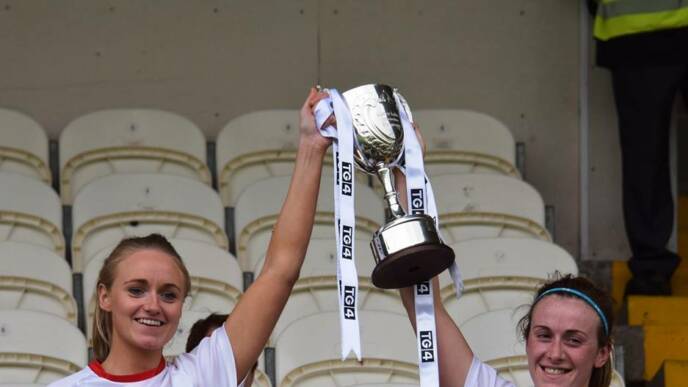 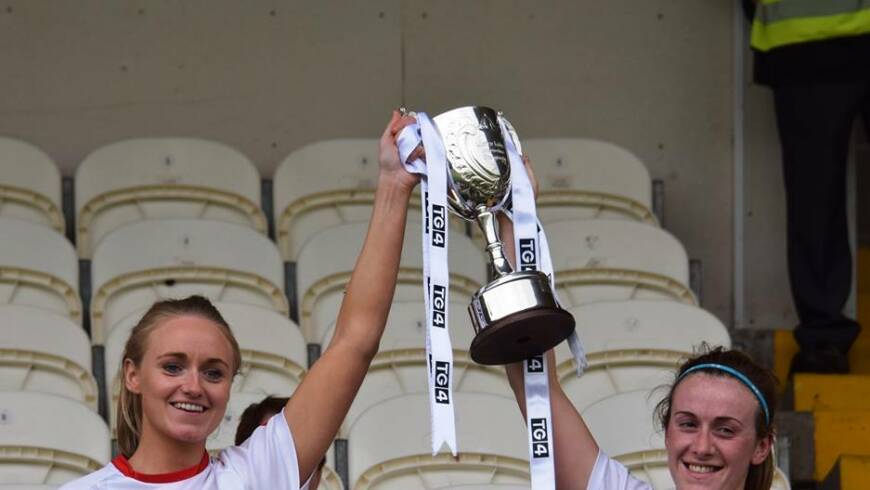 Ulster Ladies Intermediate Final
Tyrone 1-16
Down 1-12
After several years  of heartbreak and big championship loses the Tyrone ladies seniors were crowned Ulster intermediate football champions for a first time at Clones ahead of the mens wonderful semi-final win. Niamh O’Neills superb 1-7 from play inspirational with every one of the side playing a pivotal role as they edged home with four points to spare.
It was Tyrones first success since 2009 as they  took a massive step back on the road to senior football. Regrading was a key factor, Neamh Woods who was unable to play through injury in the decider admitted it had been a vital call “ We needed to get the regrade to build for the future, winning this title was a major step for us”
Gerry Moane had taken the reigns of Tyrone at the start of the national league campaign , no-one wanted the job, at St Tiernach’s Park, he was emotional ” We have girls on that team today that wanted to be here, now they have got their reward, it’s so special for some of the older girls in the side , Tyrone have waited a long time for this.
Down, inspired by Aileen Pyers were always in the tie, they battled hard created chances, at the cutting edge though they just lacked experience a key forward, in Niamh O’Neill Tyrone  had just that , the young Sperrin Og forward was superb, Downs Pyers scored 1-5, 1-1 from play.
Tyrone held a one point half time advantage after both sides had enjoyed periods of dominance in an entertaining and pacey opener.  Tyrone were missing captain Neamh Woods, her shoulder injury had not cleared up,  it certainly didn’t affect their game. Tyrone built a head of steam and led 0-6 to 0-1 after ten minutes, penetrating runs from the half back line from Christiane Hunter, Tori Mc Laughlin and Cathy Donnelly opened up Down time and time again.  Shannon Quinn impressed round the middle, Tyrone were on a roll. Emma Smyth and Laura Shavlin traded early points before five points for Tyrone without reply.
Smyth scored a fine brace from play, Maria Canavan landed a free ,Niamh O’Neill and midfielder Meabh Mallon added to the Tyrone tally. Down regrouped coming more and more into the game, Aileen Pyers and Kate McKay got the scoreboard moving for them, Tyrone responded .A long ball from Hunter down the right was collected by Smyth who in a neat one two teed up Niamh O’Neill for the days opening goal. A super finish under the keeper.
Down didn’t panic they upped the tempo and enjoyed plenty of  ball with McKay and Jordan Magee delivering some great ball. McKay and Pyers closed the gap and they were right back in it when Chara Laverty was upended . Pyers slotting home the penalty with Grainne McClean adding an equalising point.
O’Neill scored a late brace , Pyers one for Down and Tyrone led by one at the break.
Down had a chance moments after the restart when Mairead Kavanaghs effort skirted the goalline and was cleared by alert defenders. Points traded again too with O’Neill and Smyth for Tyrone, Pyers and McClean for Down all finding the range, Tyrone pulled away again, Emma Hegarty scored an outrageous point and O’Neill left three between the sides. The Srerrin Og player also had the ball in the net again, only for it to be ruled out for a square infringement.
Pyer’s and after yet another patient build up McKay closed the gap, once more  Tyrone responded with the nippy Smyth and O’Neill again raising white flags with four minutes to go.
The Tyrone defence with Karen Quinn and Joanne Barrett  sound tightened things up again and this time there was no Down comeback as Tyrone, after five wides in quick succession latched on O’Neill and Teri McCusker points to seal a four point win and a place in the quarter finals.
A great display from both sides, entertaining stuff from Tyrone, the workrate was superb and they played some decent football from start to finish.