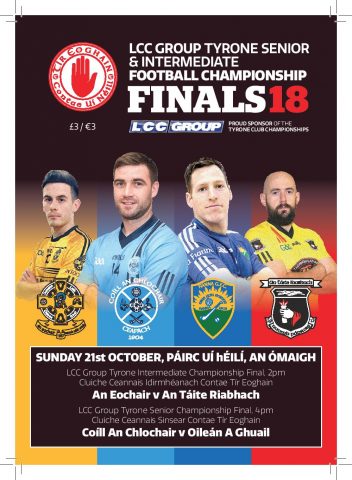 All roads will lead to Healy Park in Omagh on Sunday afternoon 21st October for the LCC Group Tyrone Intermediate & Senior Football Championship Finals between Augher St. Macartans V. Tattyreagh St Patrick’s and the Coalisland Fianna V. Killyclogher St. Mary’s clash. The curtain raiser to the Senior Final will be the eagerly awaited Intermediate football championship final between two highly fancied sides Augher St. Macartans and Tattyreagh St Patrick’s. The Tatt’s last year’s Junior Championship winners are in back to back finals and one game away from Senior Football. This is sure to be an epic battle To mark the occasion the Tyrone Communications Committee have produced a bumper 60 pages full Colour Match Day Programme full of stats and information. Speaking ahead of the  Finals, County PRO Eugene Mc Connell stated the Match day programme for Sunday’s finals is a Must Buy Momento. The programme is filled with many special features including a look back at both the 2018 Intermediate and Senior Championship campaigns There are a number of other highly interesting articles and features looking back at the first ever County Final. Another special feature takes a minute out with 4 Key Players involved in Sunday’s Finals and gets their views and opinions on quite a number of interesting aspects to their footballing careers. The Four players concerned are Augher’s Conor Hackett, James Darcy from Tattyreagh while the Senior players under the spotlight are Coalisland’s Michael Mc Kernan and Killyclogher’s Tiernan Mc Cann. All the team Managers provide their pre match opinions and in-depth analysis of their opposition. It looks where the game can be Won or Lost. Included in the programme are special features on the Tyrone Ladies All Ireland winning success as well as the latest from the Hurling and Handball exploits within the County. Programmes will be on sale at the grounds and are likely to sell out quickly so the advice is make sure you buy your copy early to avoid disappointment. In conclusion County PRO Eugene Mc Connell stated the programme provides a marvellous keep sake for all supporters and in years to come will serve as nostalgic record of each teams achievement in reaching the County Final.