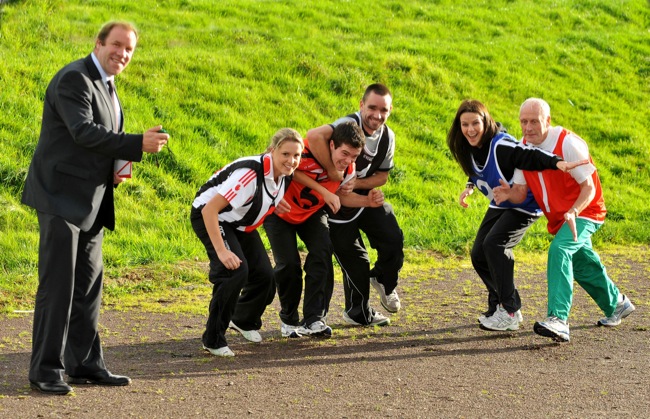 So at last the identity of the Club Tyrone ‘Human Race’ is revealed, well at least five of the participants anyway.  The identity of the sixth runner, a former Tyrone legend, will be announced on www.TyroneGAA.ie soon…..
————
Read the runners profiles below ….

Sponsor of the hare for Club Tyrone Night at the Dogs Fergal Logan from Logan and Corry Solicitors, keeps an eye on the stopwatch as Shauna Jordan (Tyrone Camogie), Shea McGarrity (Tyrone Minors), Ryan McMenamin (Tyrone Seniors), Maura Kelly (Tyrone Ladies) and Patsy Forbes get in some training before the big race on Friday 8th October in Drumbo Park.  Last few seats on sale now – contact Roisin on 07734413993
————
Lane 1 – Patsy Forbes (Former Tyrone Player)
Patsy played for Tyrone seniors throughout the 1960’s and early 1970’s.  He was Tyrone minor captain in 1959 and was captain of the Ardboe senior team which won the O’Neill Cup in 1968.  He is the current 100m and 200m metre Irish Champion for his age group.  He represented Ireland this year in the European championships and is currently ranked 7th in Europe in the 100m and 200m. 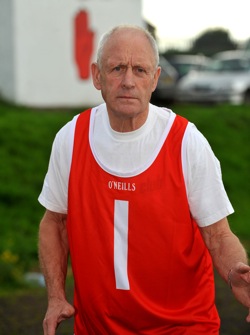 ————
Lane 2 – Maura Kelly (Tyrone Ladies)
Maura comes from the Eskra Emmetts club in County Tyrone. She plays for St Macartan Ladies club and has won 4 Senior Club Championships and 3 Senior All County Leagues.  She was involved in the Junior All-IreIand winning Tyrone team, and the winning Ulster Inter-provincial team in 1999.  I current playing member of the Tyrone Senior Ladies she has won 4 Ulster Senior Medals, captaining the side in 2006 and 2008.  She has been nominated for an All-Star in 1999, 2006, 2007 & 2008. 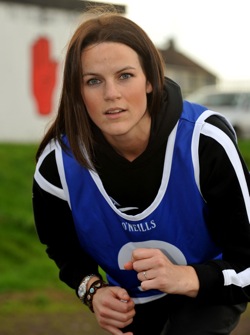 Lane 3 – John Lynch
The 1986 All Star is a welcome addition to the lineup.  Over the years John has kept himself in great shape and is relishing the opportunity to take on McMenamin.  At 18 years of age Lynch went straight into the Tyrone senior squad.  The popular Castlederg man is a sprint champion and a former member of the Finn Valley Athletic Club in Ballybofey. 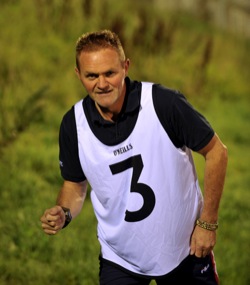 ————
Lane 4 – Ryan McMenamin (Tyrone Seniors)
‘Ricey’ has won two National Football League titles, three All Ireland Senior medals and an All Star award.  He has lifted two Tyrone senior championship medals with his club Dromore.  Asked about what tactics he would be using to win the race he replied ‘ whatever it takes! ‘. 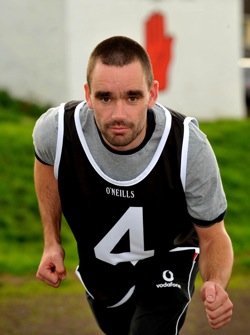 Lane 5 – Shea McGarrity (Tyrone Minors)
Shea has had a wonderful year for club, school and the county.  Back in February he lifted an All Ireland Intermediate medal with his club Cookstown Fr Rock’s.  In March he added a MacRory Cup medal with St Patrick’s Academy Dungannon while in July and September he lifted the Ulster Minor and All Ireland Championships as captain of the all conquering Tyrone Minor Football team. 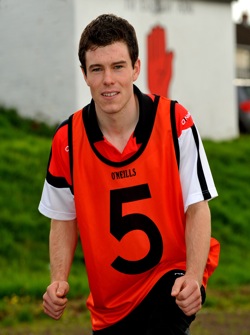 Lane 6 – Shauna Jordan (Tyrone Camogie)
Shauna is one of  Tyrone Camogie’s brightest stars.  She was centre half forward on the victorious Tyrone Camogie team which lifted the Division 4 Natioanal League back in April.  She has won six Tyrone Championship medals playing with her club Eglish. 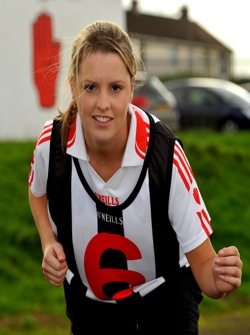