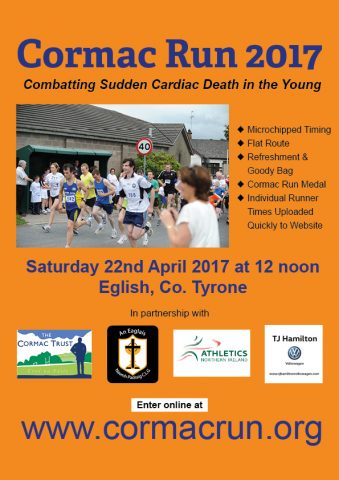 On the 22nd April 2017 all roads will lead to Eglish for the annual Cormac Run. Celebrating its 7th year the run was rebooted last year to include official timing and a new route which starts close to Park Cormac. Last year the race saw over 600 people participate in what was a very successful event which raised money for The Cormac Trust. This money was used to purchase defibrillators and CPR/AED training for local clubs, community groups and amateur sporting organisations. The event comprises of a 10k and 5k which are both chipped and timed officially. Last year’s winners Michael McLernon and local girl Pauline McGurren will be hoping to defend their titles once again, both showing great performances on the day.
The organisers of this year’s event are hoping for a bumper turnout once again this year with budding participants and seasoned runners urged to sign up online early. Whilst registration will be available on the day, race director Ruairi Martin hopes that anyone wishing to enter will sign up online before the race deadline. “Last year we were overwhelmed with the support for such a wonderful cause, however I would ask people to sign up as soon as possible to avoid delay and congestion on the race morning”. Ruairi has been involved in the Cormac run from the beginning and has been delighted to see it grow on a yearly basis. “We are also pleased to announce that once again our main sponsor for the Cormac Run is TJ Hamilton, they have been very generous with their backing for this race and have provided the lead car for both races”. The race itself begins at 12noon with registration available on the day. For pre-race registration and full race day details, including the route go to www.cormacrun.org – hope to see you there!