Home » Eglish claim back to back Ulster titles

Eglish claim back to back Ulster titles 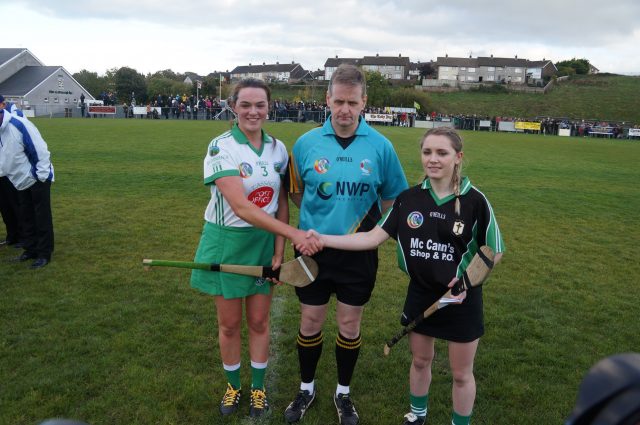 Eglish camogs took to the field against Granemore on Sunday in the AIB Ulster camogie Intermediate championship final at Pearse Ogs club Armagh. It was a late start and a very cold and dark afternoon greeted the players as the match got underway.
Granemore won the toss and took what looked like a very slight wind advantage in the first half.
It was Eglish who took the first score with a Ciara Donnelly free with only a minute on the clock. Neither team gave an inch early on and as a result there were a lot frees awarded. Niamh McNulty added her first point with five minutes gone as she turned her marker to make room for her shot. Maebh McHugh extended her sides lead from open play soon afterwards. Granemore could only manage a wide before another Donnelly(c) free kept the scoreboard ticking over. Eglish were continually probing the Granemore defence and despite some heroic efforts the scores just kept coming for the defending champions. McHugh doubled her points tally with seventeen minutes gone. Kelley Anne Fay was again the play maker in the middle of the park and she turned point taker as she took one of her own from open play. Shauna and Aisling Jordan were having some fine periods of play as Granemore struggled to cope with their sharpness.
Goal keeper Leona Gallagher was the cool head of the defence and she and Julie Lagan coped with whatever threat came their way. Gallagher made a fine save and put the sliotar out to give Granemore a 45 metre free which Rachel Merry duly despatched with twenty minutes gone.
Donnelly and McNulty added two further points in as many minutes as it was all one way traffic for Eglish. Fay, McNulty, Donnelly(C) and Donnelly (L) all took points in the next five minutes. Merry ended the half with another point from a free for Granemore.
Half Time Eglish 0-12 Granemore 0-2
Granemore started the half with pace and vigour but could only manage a wide early on. Shauna Jordan again for Eglish was frustrating her opponents efforts to reduce the defecit. It was business as usual as Donnelly(C) took the first point of the half with seven minutes gone. It was cancelled out when Aoife Conroy took a fine point from long range. Two more Donnelly(c) points and a Merry free continued the one sided feel to the game. Eglish brought on all their subs with fifteen minutes remaining. The game was all but over as a contest and Eglish never relented as they piled on the pressure as the points just kept coming with ease. Merry for Granmore added two more points either side of Eglishs’ continuous scores.
Full Time Eglish 0-19 Granemore 0-6
Congratulations to Eglish who will now go on to represent Ulster in the All Ireland Intermediate Championship semi-final. That is back to back tiles for a club that is celebrating fifty years and now a total of six Ulster titles in total. They will be hoping to emulate the great Eglish side that won three in a row in ’85,’86 and 87.
Ciara McGready, Eglish captain, was presented with the winning trophy by Kathleen Woods Ulster Chairperson. Ciara Donnelly for Eglish was Player of the match and she received a winning trophy,
Eglish Scorers
Ciara Donnelly 0-9 Niamh McNulty 0-4 Maebh McHugh 0-3 Kelley Anne Fay 0-2 Leanne Donnelly 0-1
Granemore scorers
Rachel Merry 0-5 Aoife Conroy 0-1
Martin Donnelly 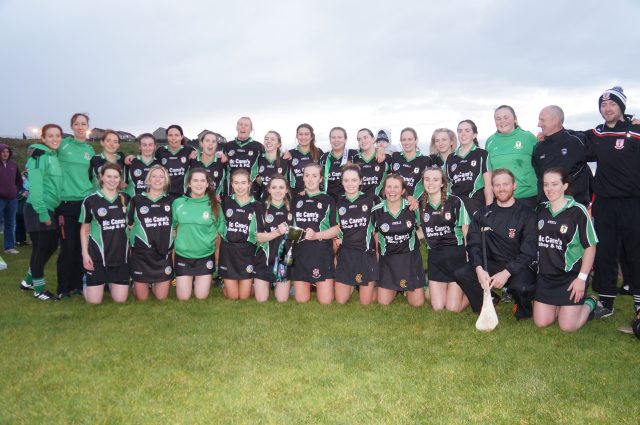 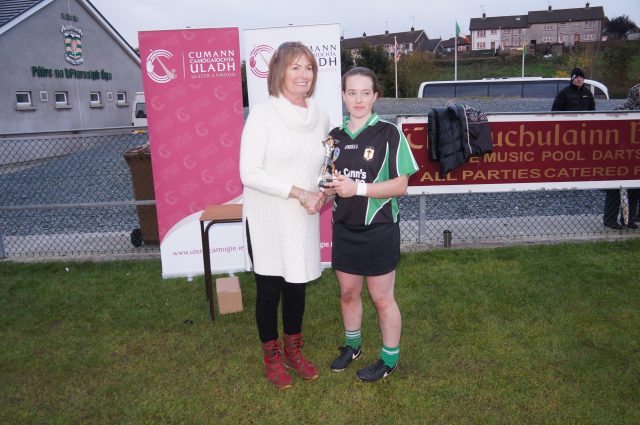