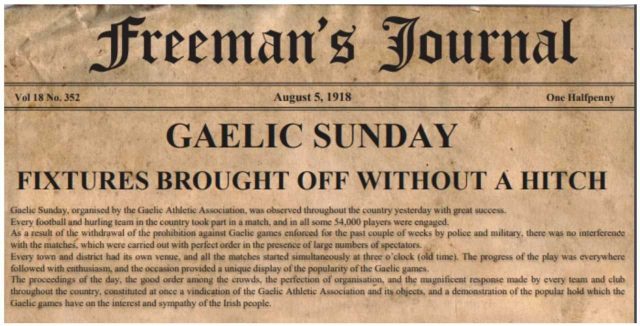 August 4, 1918 will be remembered as one of the most remarkable and significant days in the history of the GAA. Known as ‘Gaelic Sunday’ – it was a day when GAA clubs stood against the British Empire and triumphed through a cultural protest.
In 1918 the British authorities in Ireland were trying to impose conscription to supplement their war effort but there was massive opposition to this. British authorities blamed the GAA in part for this opposition and hit back by trying to prevent Gaelic games from taking place, stopping the provision of special trains to carry supporters to matches and insisting that a written permit was required granting permission for any GAA match to take place.
In response the GAA declared a national day of defiance and called on GAA clubs all over Ireland to refuse to seek a permit and instead organise club activity for 3pm on Sunday, August 4.  The result was that across the country an estimated 54,000 players took part with more than 100,000 watching and such was the success of the initiative that the attempt to impose a requirement for a license to play Gaelic games was scrapped.
This year marks the centenary of that courageous act and the want GAA Clubs all over Ireland to show a similar level of pride in their club, their games and the area they represent.  On August 4th every club in Tyrone will take part in Gaelic games as part of these commemorations.  On Saturday 4th the Division Three clubs will have a full round of Reserve and Senior fixtures at 1.30pm and 3pm.   For Division One and Two clubs the Reserve League will be played at 3pm, with the club’s U.12 team playing at 1.30pm.
Clubs may also wish to organise their own event over the weekend such as a family day or club history exhibit. What matters is that 100 years on our games are strong as ever and we have GAA clubs we are proud of.  Please see attached images and below link to official video for social media promotions:
https://www.youtube.com/watch?v=xU7t4oAaMcU
By tyronepro Tue 24th Jul