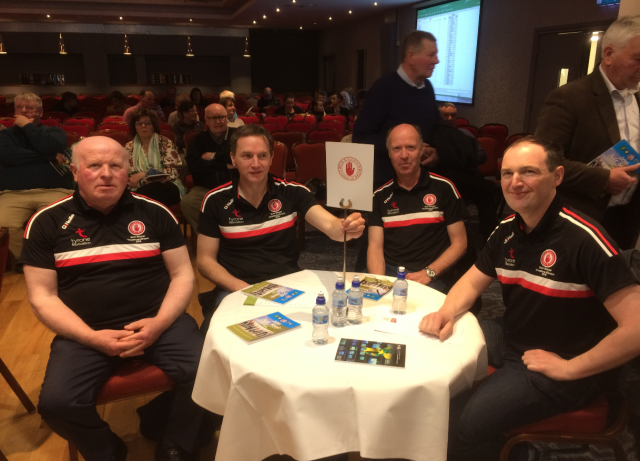 COISTE CHONTAE THÍR EOGHAIN
Coiste Cultúir agus Teanga
Tír Eoghain Success at All Ireland Finals
The All Ireland Finals of Scór Sinsear began in Clayton Hotel in Sligo at 11.00 am on Saturday 14th April with Tír Eoghain clubs N Colmcille, An Charraig Mhór, joining thirty of Ireland’s other counties in the Tráth na gCeist competition. In this a seriously competitive event the winning county to emerge from the finals was the Kerry Club champions, Pearse Brothers, Churchill. Nevertheless the Carrickmore club acquitted themselves well and the experience gained will prove a worthwhile exercise in the future.

An Charraig Mhór, Pat Daly, Peter Kerr, Seán McGuigan and Finbar Grugan prepare for the competition to begin
Meanwhile the venue for the remainder of the Scór Sinsear competitions, took place nearby in the Knocknarea Arena at Sligo Institute of Technology, the other three Tír Eoghain competitors were going through their sound checks and last minute rehearsals in preparation for the finals to begin at 3.00 pm.
The National Scór Committee provide the most up to date sound and Audio Visual equipment at all of the All Ireland finals and indeed the programme was available live on the TG4 ‘You Tube’ platform allowing the action from th finals to be streamed live as it happened in the Arena in Sligo. The Derrytresk group are pictured below going through their sound check which helps to show the  size and the effort the Scór Committee goes to in preparation for finals such as this. 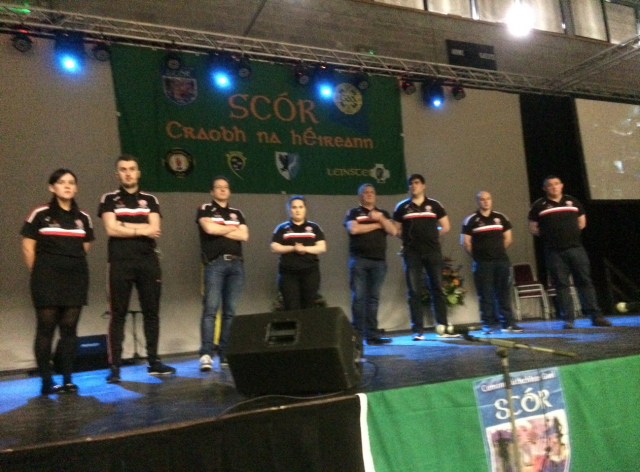 The Derrytresk group performance entitled, “That the Young Might See the Morn” depicted the one of the many injustices perpetrated on the Irish people during the Gorta Mór in Ireland in the 1840’s. It was performed with the spirit and determination which the group had displayed right from the start of the competition in St Joseph’s College in Coalisland at the beginning of February. Doire Treasc put on one of their best performances in a piece loaded with historical content but the winners emerged from the Feenagh / Kilmeady club in Limerick. This was an event which the Derrytresk competitors, Club and Community can hold their heads high for their dedication and commitment put Iinto their efforts.  Maith sibh ar fad. 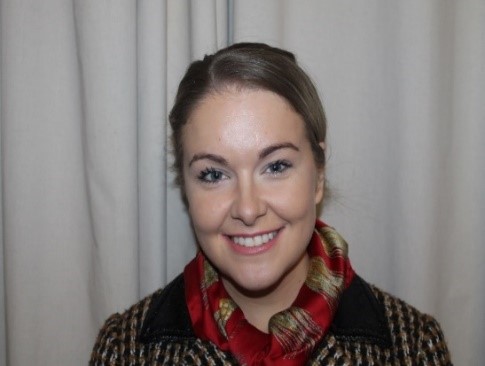 Tír Eoghain were also represented by Annette Kelly from the Carrickmore Club in the Aithriseoireacht section with her, soon to become a very topical piece entitled “The Pope in Ireland”. Annette put on a very professional performance giving a full blooded piece on a typical Dublin family’s excursion to the Phoenix Park to see the Pope on his first visit to Ireland. The title was won out by Breandán Mac Gabhann from the Clann na nGael, club in Meath.  This was Annette’s first experience of an All Ireland Final at Scór Sinsear level, there is no doubt that she will have gained a vast amount of knowledge from her experience in Sligo
In the other event that Tír Eoghain competed in was Amhránaíocht Aonair with Dearbhla Scallon, who is well known to Tyrone supporters in Healy Park as she regularly leads the singing of Amhrán na bhFiann at Tír Eoghains home games. Both Dearbhla and her sister, Bronagh, also a county champion at Solo Singing, are well known in Scór circles throughout Ulster. Many congratulations to Dearbhla on achieving the ultimate of winning an All Ireland title at Scór Sinsear level. Great credit and praise must go to her, her  family and the Gortin club and community.  Gortin now join the ever growing list of clubs in Tír Eoghain who hold All Ireland title at Scór. Tír Eoghain continues to hold the top position in the Roll of Honour at Scór Sinsear in winning their 30th title. 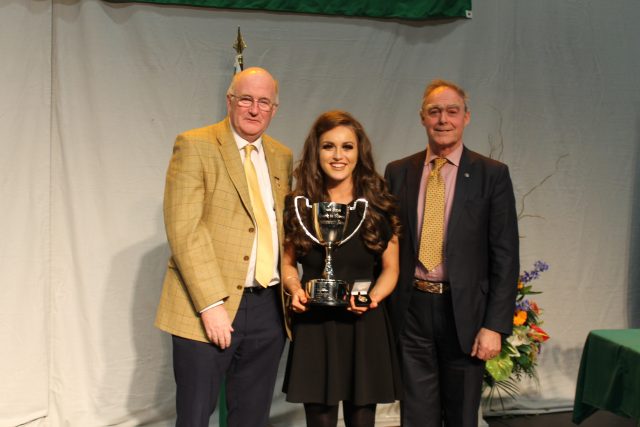 What remains now for Tír Eoghain is to continue with the commitment to maintain an even bigger effort to achieve the aim of having all the clubs in Tír Eoghain taking part and competing in Scór competition during the Golden Jubilee of Scór in 2020.