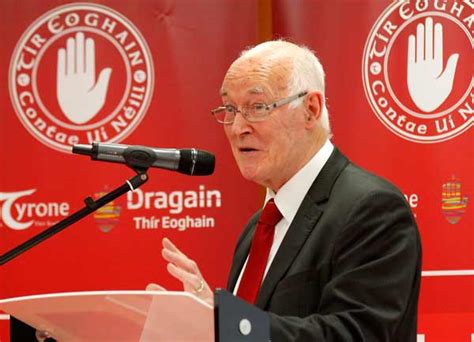 Joseph Martin has had a life-long association with the GAA in Tyrone as a player, administrator and historian and has been working on the history of the Association in the county for nearly half a century.
A native of Carrickmore with whom he won three senior football championships in the 1960s, he is a past pupil of St. Patrick’s College, Armagh and a graduate of the National University of Ireland. He taught history for ten years before joining the Western Education and Library Board in 1974. He was Chief Executive of the Board from 1995 until his retirement in 2004.
He began researching the history of Gaelic games in Tyrone in the late 1970s on behalf of the Tyrone County Board and published the first edition of this critically acclaimed book in 1984 to mark the centenary of the foundation of the GAA in 1884. Joe is again about to release his latest edition of the Tyrone GAA History.

The GAA in Tyrone

In the Twenty-first Century

Tyrone’s fourth All-Ireland senior championship victory, secured on a glorious September day in Croke Park, provides a fitting opportunity to capture the remarkable story of the GAA in the county in the twenty-first century. The first edition of The GAA in Tyrone was published in 1984, alongside histories of many other Irish counties, to mark the centenary of the Association’s founding.  A second edition, The GAA in Tyrone: The Long Road to Glory, was published in 2004. It updated the previous work and covered the subsequent twenty years leading to both the centenary of the founding of the GAA within Tyrone in 1904 and, of course, the winning of the Sam Maguire Cup for the first time in 2003. A shorter, special edition, The GAA in Tyrone: The Road to Greatness was published in 2005. It summarised the previous periods and covered in detail the next two years, culminating in the second All-Ireland senior football victory of that year.
This latest publication captures the amazing and sustained transformation of The GAA in Tyrone during the first two decades of the twenty-first century. This remarkable, unprecedented period has seen the county elevated to the top tier of Gaelic games – a consistent force to be reckoned with at the very highest levels of Gaelic football. The purpose of this new volume –
The GAA in Tyrone: Raising the Red Hand – is set to bring that story together. It is a story, however, that cannot be told in isolation from the efforts of generations of Gaels in Tyrone to establish, secure and enhance the Association in the county.                  This current publication first summarises briefly the history of the GAA in Tyrone from its beginnings until the end of the last century. It then focuses in some detail on the historic achievements of 2000 to 2008, when incredible success at underage level and a breakthrough in winning the county’s first National Football League served as a prelude to the stunning achievement of winning three All-Ireland senior football championships in six years. It then captures the following ten years, a period which still ranks as one of the most successful in the history of Tyrone GAA even if the ultimate successes of the immediately preceding years were not replicated. Finally it deals with the challenges faced by the county during the pandemic of 2020, and the glorious achievement of winning a fourth All-Ireland title in 2021.
In addition to this, it deals with some of the major developments that have transformed the GAA in Tyrone over the past twenty years. Beyond the fields of play in inter-county football, the story of the GAA in Tyrone in the twenty-first century is an equally remarkable one. Hugely significant developments have taken place, most notably the provision of the world class Tyrone GAA Centre at Garvaghey and the establishment of Club Tyrone. Tyrone clubs have developed the most modern facilities and infrastructure for players and spectators and the county has utilised modern means of communication and new technology and sports science to a standard that would match many professional sporting organisations. Another highly significant development captured in the book is the expansion of sporting opportunities for women and girls on an unprecedented scale and the increasing participation of women in all aspects of the workings of the Association in the county.
In addition to recording the achievements of the Association both on and off the field of play, this book includes colour photographs of Tyrone’s winning teams at provincial and national level over the past twenty years. Like its predecessors, it also contains a wide range of appendices, including Tyrone club championship winners, Tyrone’s record in senior football championship games since 1904 and team lists of Tyrone’s provincial champions at every level and of the teams who represented Tyrone at senior level since their first participation in 1904.

The book will be available from this weekend. It may be purchased through Clubs across the county.
It will be available from selected shops in Tyrone.
It can also be ordered from the County Tyrone GAA Office: Phone – 028 8556 7723, Email:  am.mcnulty.tyrone@gaa.ie
The book is priced @ £15 / €18 (plus P&P where necessary). (A Must Read for all GAA enthusiasts)
An official launch will be made by County Chairman, Michael Kerr at the County Convention in Garvaghey on Tuesday 14th December. 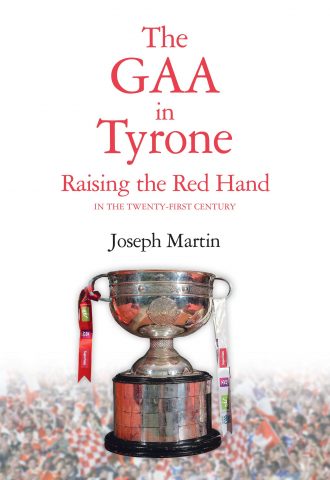