By tyronepro Mon 15th May 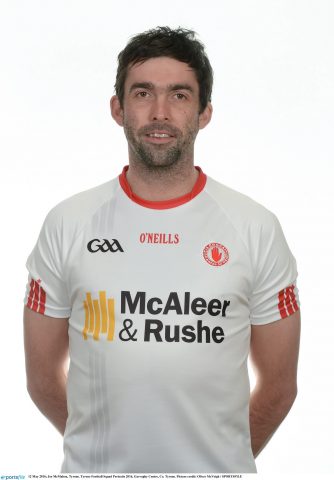 The combination of injuries over the last two years and the struggle to respond to treatment to gain the fitness required at this level has compelled me to call time on my inter-county career. I have pushed myself to the limits working closely with the Tyrone medical team but I have to accept the reality that it is my body which is saying it’s game over. Hopefully though, I will still be able to play with my club, Omagh St Enda’s.
I was very fortunate to have played with and against some of the greatest players to have graced the game and under one the GAA’s greatest managers, Mickey Harte. I am so indebted to those who helped me along the way- my wife Geraldine and I must mention my children Aoibhe, Anna and Joseph, my parents, family, friends and my club Omagh St Enda’s, my former schools Omagh CBS and St Conor’s P.S and St Mary’s College Belfast. I acknowledge the support of the Tyrone backroom teams and the friendship of Mickey Moynagh over the years. The GPA has also been a great help in time of need.
I can reflect now on the elements that make Tyrone such a passionate county for its football- the County Board, Club Tyrone and the loyal supporters with their families. I thank all of them for the generosity of their time and resources and for the brilliant memories shared.
I wish all my colleagues in the 2017 squad every success for the championship ahead. I say to them, enjoy all your days with Tyrone. There is no greater honour than pulling on the jersey.
Joe McMahon Profile:
Age: 33
Height: 6’2
Weight: 88kg
Occupation: Teacher
Total Appearances: 122 (Debut v Donegal 2004 McKenna Cup Final)
SFC Appearances: 61 (Debut v Fermanagh 2004)
SFC scores: 2-15
Honours:
County
2 x All Ireland Senior Football Championships (2005, 2008)
4 x Ulster Senior Football Championships (2007, 2009, 2010, 2016)
1 x Allianz Football League Division 2 (2016)
1 x All Ireland Minor Football Championship (2001)
1 x Ulster Minor Football Championship (2001)
2 x Ulster Under 21 Football Championship (2002,2003)
Club
1 x Tyrone Senior Football Championship (2014)

By tyronepro Mon 15th May