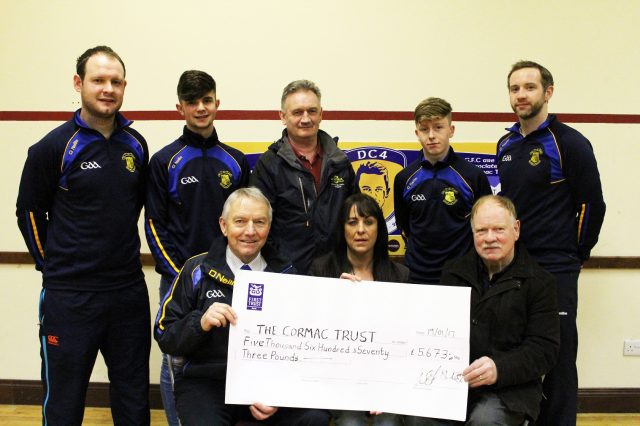 Killyman St Marys recently presented a cheque to The Cormac Trust for £5673. This money was raised from the Daryl Comac Memorial Tournament and associated events.
The objective of the tournament was to get competitive football for the team, raise money and to remember Daryl – all of those expectations were exceeded thanks to the hard work of the tournament organisers.
None of this would have been possible without the teams that took part. The mens and ladies teams and their management committed fully to the tournament and ensured games were well supported. The mens teams were Rock, Derrytresk, Brackaville, Brocagh and Killyman. And the ladies teams were Moy, Aodh Ruadh, Stewartstown, Donaghmore, Clonoe, Edendork, Coalisland and the Rock.
As well as the teams, the referees were integral to the tournament running so smoothly. The time they gave up to officiate the tournament games was greatly appreciated by all the clubs involved.
The line-up for the chat night was incredible. Joe Brolly, Kevin McCloy, Brian McGuigan, Bernard Flynn, Barry McElduff and Mark Sidebottom provided great entertainment for the audience in Killyman. The stories and yarns made the evening very special and memorable. These men must be commended for giving up their time for this worthy cause.
All of the events were well supported by the volunteers of Killyman St Marys. From tea makers to car park attendants everything was covered and well organised. The club grounds were certainly kept busy.
To everyone who donated and to the sponsors who made this all possible – they cannot be thanked enough. They helped raise this money for a charity close to the hearts of everyone in the Killyman club.
The final mention must go to Daryls family and friends. They must be recognised for allowing Killyman to host this tournament and for supporting the Club in this venture. The strength and encouragement they have shown has been a dominant force in the success of the Daryl Comac Memorial Tournament!
Daryl will always be remembered in the Killyman Club.