Home » Ladies Claim Back To Back Titles

Ladies Claim Back To Back Titles 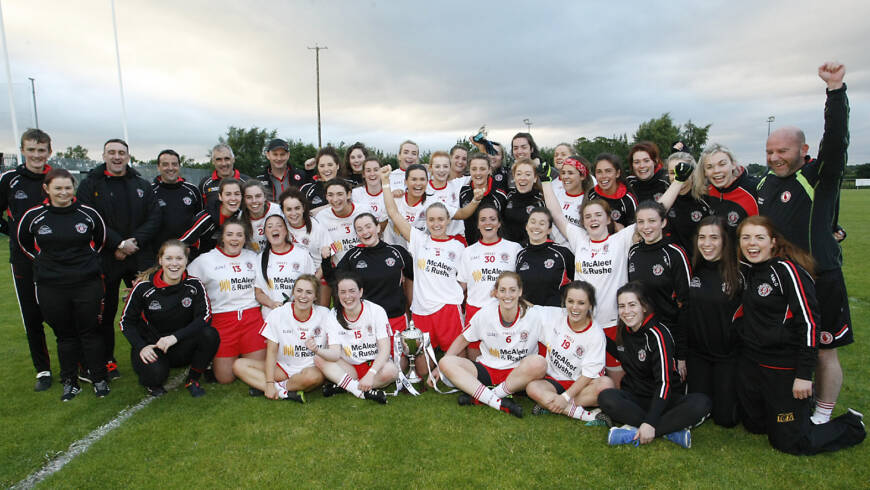 TG4 Ulster Intermediate Football Final
Tyrone 0-17 Down 0-3
Tyrone turned in a powerhouse performance of exciting attacking football as they eased to a fourteen point win over Down on Friday to claim back to back Ulster intermediate titles. Down could not live with the pace and clinical edge to the Tyrone game but to their credit they worked tirelessly throughout.
The foundations for this second title were laid during an impressive first half,  Tyrone leading by eight at the break scoring nine fine points.  Niamh O’Neill back from injury and veteran Gemma Begley landed six between them, Aine and Maria Canavan also tagged on points but Tyrone could easily have led by more as they bossed the game for long periods.
The Mourne girls worked  hard against the breeze in the first half albeit too reliant on the threat posed by Kyla Trainor who was their only first half score getter in the first period.A handful of chances dropping wide and short.
Tyrone’s defence dealt with everything that came their way. Disciplined throughout  full back Joanne Barrett, Shannon Cunningham, Emma Mulgrew , Emma Brennan, Christiane Hunter and Captain Neamh Woods marshalled the back with such assurance, Down struggling to break them down or stop the powerful breaks forward.
Down were expected to make a real game of things in the second half with the breeze but the comeback did not materialise as Tyrone dominated once again.  Woods and O’Neill kept Tyrone on the front foot from the off, they threw the ball about with authority and created a raft of chances.
The surefooted O’Neill, Begley, Rebecca Mc Crory and Maria Canavan all added points as the tie wore on to its inevitable conclusion in front of a massive crowd. Tyrone controlled every aspect of the game as they ran out more than comfortable winners. Down latching on just a further 0-2 in the contest.
A measured display for Gerry Moane’s side who now head into an all Ireland quarter final very much focused on an all Ireland run.
Tyrone Scorers: Gemma Begley 0-7, Niamh O’Neill 0-4, Maria Canavan 0-3, Aine Canavan 0-2 and Rebecca Mc Crory 0-1.
Down Scorers: Kyla Trainor 0-1, Cusla Savage 0-1, Aishling Cull 0-1