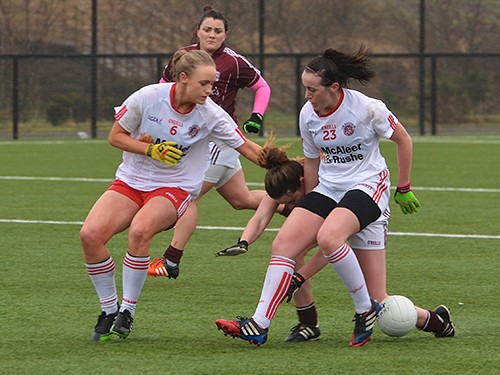 Tyrone V Sligo
Sunday Healy Park 2pm
The Tyrone ladies  open their division two national league campaign this Sunday with Healy Park hosting their clash with Sligo. Having lost an all Ireland intermediate semi-final last year the Yeats girls are keen to get off the mark with an early season win against a Tyrone team full of confidence.
Tyrone claimed their first Ulster intermediate title in 2016 after regrading but they lost in the all Ireland series to Clare and since then it has all been about a return to competitive action. Manager Gerry Moane has bolstered his squad and backroom team, former County star Sarah Connolly, who Moane would love to see get her boots on again, has brought a new demension to the squad preparation as a specilaist coach.
Tyrone dropped to division two after another poor division one campaign in 2016, on this occasion, unlike other years there was no lifeline, no late league win to retain status although a new look Tyrone did put in some decent performances in what really was their transition year. Manager Moane accepted his sides fate long before the final game of the 2016 league season and they find themselves perhaps better placed to challenge and possibly string together some results,
“ Over the past few years Tyrone have hung on to division one status by their fingernails, a win here or there was enough to keep them up but last season it was just too much to ask of our young squad, we were relegated but it was no bad thing, it gives us a foundation now to build on, we are probably in the right place for our current status there is no getting away from the fact that there are some very good teams in this division, Clare, Laois, Kildare, Westmeath, Cavan and Sligo are all in the mix and it’s important we get off to a good start”
Moane enjoyed his first year back with Tyrone although the appointment twelve months ago was very much on a suck it and see format, “ I came on board and wanted to see what players we had, what the commitment was like and what could be done, I have to say the girls were 100% and those that were there and are here now want to be here, that’s vital for us”
There’s no doubting though that division two promises to be a very competitive ,Westmeath and Laois complete the trio of visitors to Omagh with Tyrone facing some very tough away days against, a rematch with Clare over St Patricks weekend, Waterford, Kildare and Ulster rivals Cavan who had a managerial shake up last week, Conor Barry stepping down just shy of the league start date. The Breffni side just missed out on promotion last term, Donegal pipping them, it’s hard to know how the departure of Barry will affect them.
The Yeatsgirls scored just two wins in division two last year, they just about held on to their status, they improved though and made the all Ireland intermediate semi-final losing out to Kildare in an epic last four tie tie that went to extra time. Last week Galway edged out Sligo in what turned out to be a low scoring Connacht winter league final, it ended 1-2 to 0-3 although Sligo manager Paddy Henry was happy with a competitive outing , the manager confirming he used the Winter league series to build for what he hopes will be an improved national league campaign starting with an away win.
The  Tyrone manager is buzzing ahead of the new season and also revealed that the relationship between the County side and County board was at it’s best “ We are delighted to have the full support of the County board and new chairperson Donna McCrory , It has to be a team effort and we have a plan for Tyrone, we are all singing from the same page, the teams are based at Garvaghey, we have everything we require and there’s great support too from the likes of O’Neills and McAleer and Rushe, all important things if we want the success that we have targeted.”
The manager will cast an eye over his entire squad on Friday evening again before confirming the starting fifteen although there looks certain to be an experienced spine to the line up for this tough opener. Moane also confirmed that Neamh Woods will Captain Tyrone again this year with Christiane Hunter and Emma Hegarty named as joint vice Captains