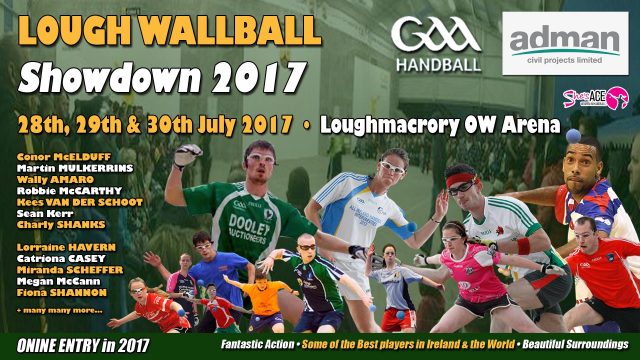 There has been some very exciting action recently in the national wallball arena with the four Provincial Wallball Championships taking centre-stage in the weekend gone by and now the pinnacle of the season coming in the weekend ahead with the hugely anticipated Irish Wallball Nationals at Breaffy Sports Arena.
The GAA Handball All Ireland Wallball Championships Finals weekend on 15th July will take top billing in mid July and the climax to the Wallball Tournament season will come with the Loughmacrory Wallball Showdown on the weekend of 28th to 30th July. The Tyrone club have now launched full entry an tournament information for what promises to be a spectacular social and action climax to a wonderful Wallball Season.
GAA President, Aoghan O Fearghail launched Loughmacrory’s impressive One Wall Arena in 2010 and the club, in addition to their £1.1 million project will refurbish the 60×30 court – all facilities set to host all the weekend Showdown action. There have been over 250 players so far in 2 of the 3 events staged with 234 in the in-between Tournament, which took place pre-Worlds 2015. There has been major interest again surrounding the 4th annual staging of the showpiece event.
Puerto Rico’s former World Champion, Wally Amaro, made a 4,000 mile round trip to Loughmacrory last August and beat the very best GAA handball stars in Ireland as he collected a second Lough Showdown Mens Open Crown, having secured the inaugural title at the event back in 2014.
The return to action of two times Irish National Champion and 2015 Lough Showdown Champion, Conor McElduff, impressive 2016 Mens Open Nationals champion,Galway’s Martin Mulkerrins, US Nationals Champion, Killian Carroll, 3 times Mens Open Nationals Champion, Armagh’s Charly Shanks plus Holland’s Kees Van der Schoot are just some of the players who have challenged for the prestigious Lough Wallball Showdown crown in addition to a host of the very best handballers in Ireland.
The 4th Annual Lough One Wall Showdown will take place at the new Outdoor fully covered One Wall Handball Complex (and surrounding courts) from Friday 28th to Sunday 30th JULY 2017. Local/Regional players (where feasible) will only be involved in matches on Friday 28th July – all travelling players will be catered for to play on Saturday and Sunday.
And lets not forget the brilliant line-up in the Ladies Open Showdown too – 2017 Ladies Open Champion, Lorraine Havern, will bid for the Open crown while previous two-in-a-row champion, Cork’s Catriona Casey, Holland’s Miranda Scheffer, and last year’s Open Champion, Armagh’s Megan McCann, are some of the ladies stars who have challenged for the top ladies honours. A host of other ladies handball stars are also making the journey including the return to action of 3 times World and 12 times All Ireland Senior champion, Antrim’s Fiona Shannon in addition to brilliant all-codes handball star, Limerick’s Martina McMahon.
Who can enter this Event…
Of course the massive appeal of this event is that there is something for everyone. While the very best players in Ireland and the World will be in action there are grades to cater for all ages (Under 10 up to 60+), Male and Female and of course for all abilities with Challenger and drop-down grades. It will be especially appealing to the many young players starting out and enjoying the One Wall Schools Handball Initiative but who would now like to experience Tournament Handball.
Exciting Spot Prizes…
In addition to all of this there will also be a few ‘Brand New’ spot Prize Games on offer over the weekend – such as half-zips, new-look jerseys etc – all as part of some additional fun activities – stay tuned for further details!
Loughmacrory Club will also be launching a New Book in 2017 and will be conducting short profiles, interviews and taking photographs as part of a special feature to be done in the Book on the Tournament for the Book. This book will be highlighting “150 Years of Handball in Loughmacrory” and is coming on the 50th Anniversary since the previous book of “100 years of handball” in the community plus 50 Years since the first Official Committee was put in place. Full details, snippets & previews of the Book will be released soon.
Open Finals on Saturday Night…
On Saturday night 29th July at the Tournament, there will be a Presentation Evening, Loughmacrory GAA Clubrooms as part of this highly entertaining weekend and that should also be a great occasion – and will follow on from the Mens & Ladies Open Finals – which will take place on the Saturday evening for the first time – having seen how successful this endeavour proved for the GAA Handball Nationals.
• Entry Deadline is MONDAY 10th JULY 2017. This deadline will be adhered to in order to guarantee all players Tournament Tee-Shirts for the event.
• Entry Fee entitles players (All Singles Grades Only) to: Entry to specified event, Refreshments for all Players on each day & Tournament Tee Shirt & Tournament Programme.
• ALL Players competing in the Tournament will be guaranteed a minimum of 2 (and planned at least 3) Matches on the weekend. Some of the under-age grades may require matches to be played mid-week prior to the Tournament and these will only involve players from Tyrone. This will depend on Tournament entry numbers.
Entry & Tournament Info Link: http://loughmacrory.com/lough-1wall-showdown-gaa-handball/ 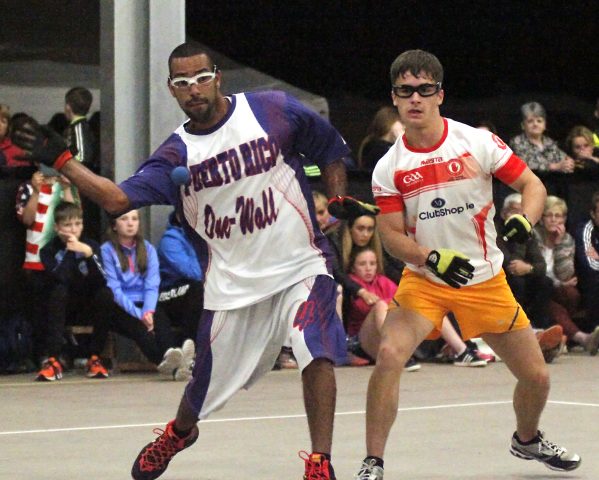