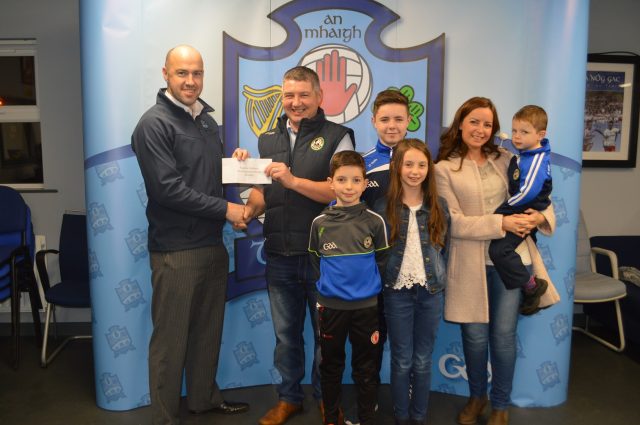 Congratulations to each of the lucky winners of An Mhaigh GAC’s 2016 Development Draw whose names were pulled out of the large tombola at our recent gala night in the Armagh City Hotel. It was a particularly good night for Mr Eugene Carberry from Galbally who was the recipient of the top prize, scooping a massive £10,000. The other prize winners were: Newcastle GAA Club, Co.Tipperary (£1000); Kerry McVeigh, Newry (£500); Maureen Donnelly, Charlemont (£300); Frank Madden, Coalisland (£250); John Gallagher, Newtownstewart (£100).

An Mhaigh club chairman Francie McQuade presents a cheque for £10,000 to Mr Eugene Carberry from Galbally who was the top prize winner in the Moy’s 2016 Development Draw. Also in picture are members of the Carberry family.