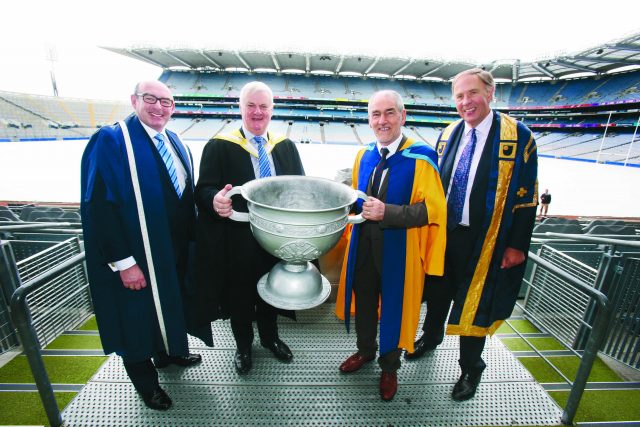 Renowned Gaelic football manager Mickey Harte was honoured by The Open University with the award of Doctor of the University at a ceremony in Croke Park today (Friday 28th April). Mr Harte had his award conferred alongside 135 graduating students – from all walks of life, of all ages and backgrounds and from a spectrum of careers.
Mr. Harte was recognised for his exceptional contribution to education and culture. The Open University makes honorary awards in line with its mission to be open to people, places, methods and ideas, and the promotion of social justice through the development of knowledge and skills.
A former teacher, Mr. Harte is perhaps best known for his time managing the Tyrone Senior GAA team. Over 15 seasons he led the team to numerous successes, including the county’s first All-Ireland title in 2003, followed again by victory in 2005 and 2008. In recent years, Mr. Harte set up the Michaela Foundation in honour of his late daughter, to provide opportunities to young girls from all backgrounds to share their experiences of the Irish language and culture and their faith, wellbeing and creativity.
Many of today’s 135 Open University graduates are from across Ireland and beyond. Many have fitted their study around work or family commitments; some have a disability or live in a remote or rural community, while others did not have traditional university entry qualifications or came from low-income households. For all of them, today’s ceremony marks the culmination of years of hard work and a commitment to learning.
One such student is Leona Cawley, aged 33, from Kilminchy in County Laois, who is graduating with a BA/BSc Hons in Combined Social Science. While working in the Probation Service in 2010, Leona wanted to develop her role, and the minimum requirement for progressing within the workplace was a degree in Social Sciences. However, she felt she couldn’t afford to leave her job to undertake a degree and so The Open University was the perfect solution for her to study at the same time as staying in work.
She says: “The Open University enabled me to fit my studies around my job. I could study in the evenings and at weekends, and without that flexibility I wouldn’t have been able to complete my qualification. My degree has definitely made me more employable and I am now in a different role with An Garda Síochána. I would recommend The Open University to anyone who wants to study around any other commitments they have. It definitely allowed me to do what I wanted to do in life.”
John D’Arcy, Director of The Open University in Ireland, said:
“Our students are a constant source of inspiration, working incredibly hard to fit learning into their lives, and proving that it makes a difference to individuals, families and communities.
Honouring Mickey Harte today alongside our graduates makes this ceremony an extra special occasion. The Open University makes honorary awards in line with its mission to be open to people, places, methods and ideas, and the promotion of social justice. Mickey is an inspirational example of all these qualities, through his devotion to Gaelic football, his charitable work through the Michaela Foundation and his personal dedication to helping others succeed. It is a pleasure to welcome him to The Open University family.”
Mickey Harte, Doctor of the University, said:
“I am delighted to have been nominated for this prestigious award of an honorary doctorate from The Open University. The OU provides a wonderful platform for those who never had the chance to study higher education to fulfil that ambition. Equally it gives a second chance to those who, for a variety of reasons, may not have been able to graduate first time round. Since Open University study has often to be undertaken whilst holding down a job or rearing a family (sometimes both) only serves to add value, as future employees, to the people who achieve their academic success in this way. The fact that the graduation ceremony is being held in Croke Park, the scene of many memorable days for me, only adds to my sense of gratitude in being nominated to receive this wonderful award.”

. 28/4/2017. Tyrone Manager Mickey Harte ( second on right) ,pictured at Croke Park after he received an honorary Doctorate from The Open University today. Also in picture is John D’Arcy National Director of the College, Aogan O Fearghail President of the GAA and Richard Gillingwater Pro Chacellor of the College .153 Students from The Open University graduated today at Croke Park Dublin.Photo: Leon Farrell/Photocall Ireland.