The first lucky winner of the Red Hand View Golden Ticket was a Dublin Supporter domiciled in Kildare.
John Carey found the lucky Golden Ticket inside his Red Hand Match programme when he purchased the new look
Red Hand View. This season in each edition of the programme there will be an opportunity for one lucky supporter
who buys a copy of Red Hand View to win a much sought after Tyrone Jersey.
So don’t forget the next publication of the Red Hand View will available for the Home game against Donegal so make sure not to miss out it could be you collecting the brand new style Tyrone jersey.
The Kids competition section there is still plenty of time to enter, if you can identify the 4 Tyrone players then post in your entry to Eugene Mc Connell c/o Tyrone GAA Centre, 230 Radergan Rd, Garvaghey, Ballygawley. BT70 2EH
The winner will be presented with their prize at the next home game against Donegal.
In the presentation photo Tyrone PRO Eugene Mc Connell and Kieran Kennedy from the sponsor O’Neill’s hand over the Tyrone Jersey to John Carey . 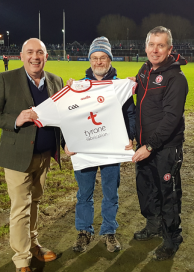