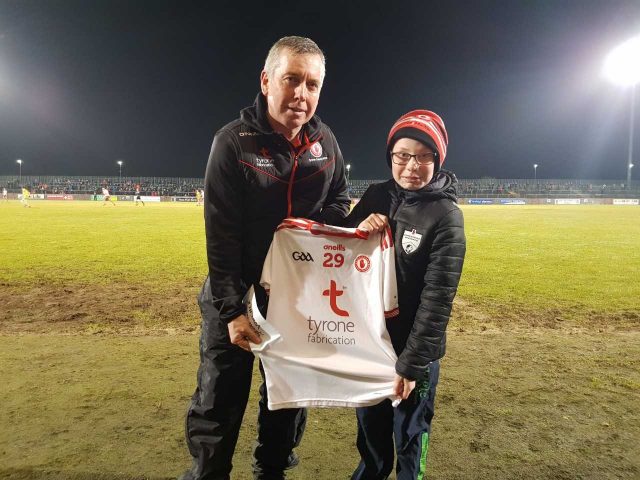 On Saturday night Tyrone played host to Donegal in The Allianz NFL in Healy Park in Omagh.
During the Interval break two special presentations took place after Kieran Kennedy made the draw to pick the winners from the Kids Competition (Name the Player) following the Dublin game.

The lucky winner was Eoin Maguire from Fintona, In the photo County PRO, Eugene Mc Connell presents a Tyrone Jersey to Eoin who was accompanied to the game on Saturday night by his Dad Dermot.

The Lucky winner of the 2nd Golden Ticket for the Donegal game was a Donegal young suppoorter Cormac Mc Colgan from Iskaheen, Muff Co, Donegal. Cormac’s father Diarmuid was at College with Cormac Mc Anallen  and Cormac stated he was called after Cormac Mc Anallen  a very poignant coincidence with the Anniversary of Cormac’s sad passing 14 years ago last weekend. 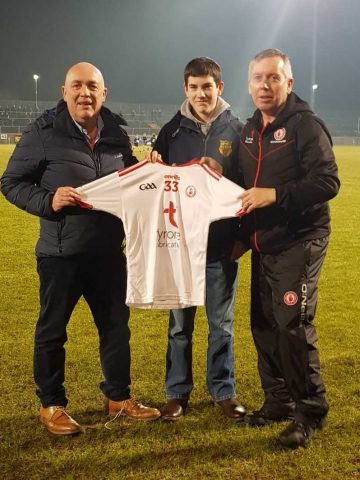 In the Photo Cormac receives his New Tyrone Jersey from Kieran Kennedy of O’Neill’s and County PRO Eugene Mc Connell.
Red Hand View Edition 3 for the Kerry Game will once again include the Golden Ticket and the Kids Competition.
Two more Lucky winners will pick up a New Tyrone Jersey.