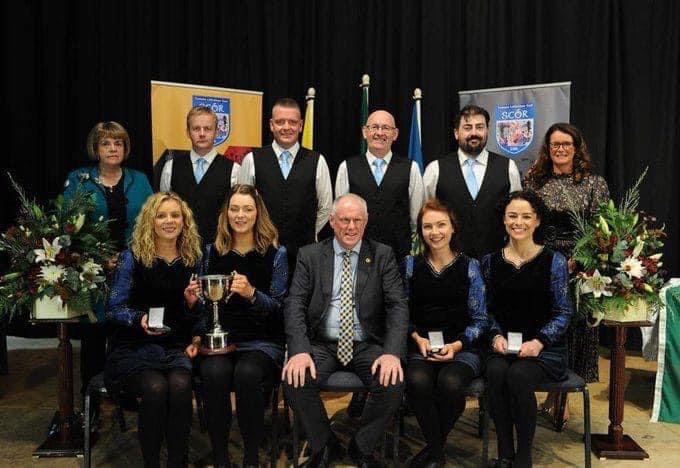 The long awaited Scór Sinsear 2020 Ulster final, which was postponed at the beginning of the Covid 19 pandemic, finally came to pass in Béal Átha an Airgid (Silverbridge) Contae Ard Mhacha, on 30th October 2021. Not only will this event forever stand apart from others due to the unprecedented delay in its completion, but also due to the fact that this was the first time that a Scór Uladh event was broadcast live online with upwards of 1500+ viewers logging in at home. Steven Hughes, Fear an Tí at all Contae Thír Eoghain Scór events, provided the online commentary for the viewers at home during the first half and later filled his usual role of Fear a Tí on stage during the second half of the event.
Contae Thír Eoghain were, as always, well represented across many disciplines on stage namely; Rince Foirne, Rinse Seit, Ceol uirlise and Bailéad Ghrúpa.
Naomh Éanna, An Ómaigh were first to take to the stage representing Contae Thír Eoghain in Rince Foirne. Although not progressing to the All-Ireland Final on this occasion, the dancers put on a great show and will no doubt be seen on a stage close to home again in the near future.
Ard Bó, Uí Dhonnabháin Rossa, graced the stage to take park in the Ceol Uirlise competition. Despite a valiant effort without a key member of the group, Ard Bó will not progress to the All-Ireland final on this occasion. All the members of the music group have just cause to hold their heads high after an excellent performance in what was in fact the club’s first ever Scór Sinsear Uladh final. No doubt we will continue to see great things from Ard Bó in Scór.
Aireagal Chiaráin represented Contae Thír Eoghain in the Bailéad Ghrúpa competition with their two beautiful songs; May the Road Rise and Billy Taylor. Although not successful on this occasion, we look forward to hearing the enchanting singing of the Airgeal Chiaráin folk once again, who knows, they may even go for 3 in a row and retain their county title once again.
The success story of the evening for Contae Thír Eoghain came in the shape of Coill an Chlochair, Naomh Muire, Rince Seit team. Coill an Chlochair were successful in securing a place in the All-Ireland final and will represent both Contae Thír Eoghain and Cúige Uladh at All-Ireland level.
Guímid gach rath agus bláth ar na rinceoirí iontacha seo agus iad ag ullmhú don lá speisialta seo!
The All Ireland Scór Sinsear Final will take place at the Connacht GAA Air Dome in Mayo on November 20th.