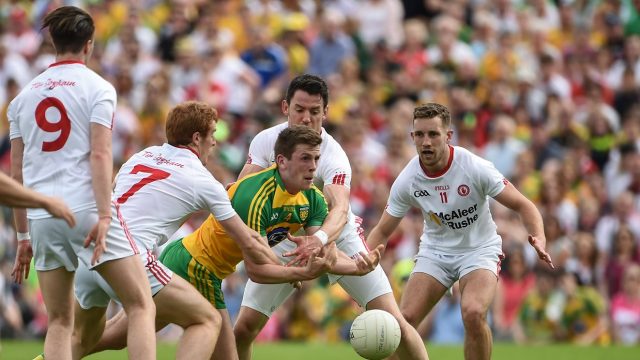 Ulster Senior Football Championship Semi-Final
Tyrone 1-21 Donegal 1-12
By Orla Bannon at St Tiernach’s Park, Clones
from gaa.ie
Provincial champions Tyrone produced a fine display to secure a hugely impressive win over Donegal.
In front of 22,609 and soaring temperatures at Clones, Tyrone’s disciplined tackling and long-range shooting were key and they kicked seven points in a row in 15 minutes before half time to effectively win the game.
It was a harsh reality check for Rory Gallagher’s young Donegal side.
Despite winning an Ulster Under 21 title and performing well in Division One of the Allianz Football League in the spring, Senior Championship football proved to be a gigantic step too far on this occasion.
Colm Cavanagh was outstanding for Tyrone, with Padraig Hampsey superbly marshalling Michael Murphy and outscoring him from play on a day when everything went right for Mickey Harte.
Tiernan McCann’s goal three minutes after the break killed the game and Tyrone coasted through to a final against Monaghan or Down on July 16.
Any thoughts the teams would serve up a repeat of the dogged, cagey 2016 Ulster final were quickly buried amidst a masterclass of textbook tackling and long-range point-taking by Tyrone.
The criticism that their forwards don’t score enough was an argument Mickey Harte’s side had dispensed with by half time with nine different scorers by the interval.
The defence contributed 0-4 and all, but one of their scores came from play.
When Sean Cavanagh pointed an injury-time free with the last act of a pulsating first half, he completed the set of six forwards who got on the scoresheet.
The sides were level three times in the opening 23 minutes, Donegal taking an early lead through frees from Paddy McBrearty and Michael Murphy.
David Mulgrew, making a first Tyrone Championship start, got on the end of a move involving the Cavanagh brothers and Mattie Donnelly pointed from the wing to tie the scores.
McBrearty and Murphy again pointed, this time from play, to restore Donegal’s two-point advantage, but there were already signs that Tyrone were going to have the upper hand with the number of turnovers they forced with superb tackling.
They grew in confidence each time they won the ball back and broke at pace and took the lead for the first time at 0-5 to 0-4 after three points in a row from Mark Bradley, Peter Harte and Tiernan McCann.
In the middle of that, however, Eoin McHugh missed a glorious goal chance for Donegal.
Michael Murphy won the midfield break and set him up, but his shot across goal flew well wide.
Marty Reilly levelled it at five points all in the 23rd minute, but Tyrone completely took over with seven points in a row before half time.
Niall Sludden, Padraig Hampsey and Kieran McGeary – with a booming left-foot point similar to his late score which sank Donegal in last year’s Ulster final – stretched their lead.
Colm Cavanagh was at the centre of Tyrone’s highlights reel, with the supporters giving them a rousing reception as they made their way off for the break.
If Donegal stood any hope of a miraculous revival, they needed to find the net early in the second half, but instead it was Tyrone who got it.
McCann jinked inside and found himself in acres of space 30 metres from goal and kept on running, drilling the ball low with his right foot into the far corner three minutes after the restart.
McBrearty got Donegal’s first point in 19 minutes soon after, but it was already game over.
The second half was played with little of the intensity or drama of the first with Tyrone able to pick scores off at ease.
McGeary and Sludden managed 0-2 each in the second half while Ronan O’Neill, Declan McClure and Niall Morgan brought the total of Tyrone scorers up to 12.
McBrearty was Donegal’s chief scorer in the second half with 0-3 from play and they finally breached the Tyrone defence in the 63rd minute, Micheal Carroll drilling a loose ball past Morgan after Michael Langan’s shot was parried.
Scorers for Tyrone: Tiernan McCann 1-1, Niall Sludden 0-4, Kieran McGeary 0-3, Mark Bradley 0-2, Mattie Donnelly 0-2, Peter Harte 0-2, Padraig Hampsey 0-2, David Mulgrew 0-1, Sean Cavanagh 0-1 (f), Declan McClure 0-1, Ronan O’Neill 0-1, Niall Morgan 0-1 (45).
Scorers for Donegal: Patrick McBrearty 0-6 (2fs), Michael Murphy 0-3 (2 ’45’s), Micheal Carroll 1-0, Martin Reilly 0-1, Michael Langan 0-1, Hugh McFadden 0-1.
TYRONE: Niall Morgan; Aidan McCrory, Ronan McNamee, Padraig Hampsey; Tiernan McCann, Cathal McCarron, Peter Harte; Colm Cavanagh, Conall McCann; Kieran McGeary, Niall Sludden, David Mulgrew; Mark Bradley, Sean Cavanagh, Mattie Donnelly
Subs: Darren McCurry for Bradley (BC, 45), Rory Brennan for Mulgrew (47), Declan McClure for C McCann (51), Ronan O’Neill for S Cavanagh (57), Cathal McShane for McGeary (57), Justin McMahon for Harte (70).
DONEGAL: Mark Anthony McGinley; Paddy McGrath, Neil McGee, Eoghan Ban Gallagher; Ryan McHugh, Frank McGlynn, Eamonn Doherty; Jason McGee, Ciaran Thompson; Michael Carroll, Martin Reilly, Jamie Brennan; Patrick McBearty, Michael Murphy, Eoin McHugh.
Subs: Karl Lacey for J McGee (32), Martin McElhinney for McGlynn (HT), Hugh McFadden for Brennan (HT), Ciaran Gillespie for Doherty (47), Michael Langan for E McHugh (60).
REFEREE: David Gough (Meath).