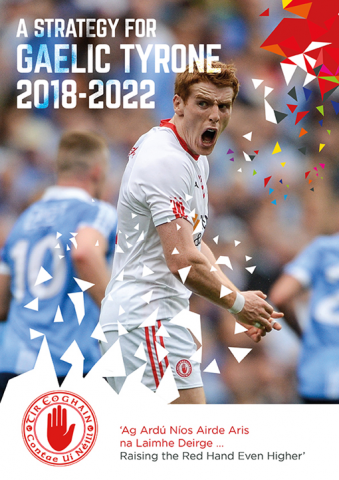 The launch event is set for Thursday 26th April at the Tyrone GAA’s Headquarters in Garvaghey. Proceedings will get under way at 7.30pm with a Finger Buffet and refreshments, followed by the official launch of the Plan at 8pm.

Ulster GAA Secretary Brian McAvoy will be present on the night.

The new Plan will guide Gaelic Tyrone through the next five years and ranges across seven Themes, covering all aspects of the County’s GAA business, on and off the field.

“A lot of work has gone into this,” Seamus McDonald, Chairperson of Tyrone’s Strategic Implementation Committee, explained.

“We’ve done the analyses, crunched the numbers and consulted very widely both within the GAA and well beyond it. We’re confident that what we have now is something which reflects both the needs and ambitions of Tyrone GAA.”

“Plans in themselves are all very well but it’s what we do with them that counts. We all now need to rise to the challenge of ‘raising that Red Hand even higher’.”

Tyrone’s new Plan is the latest in a series developed and implemented by the County.

County Chair Michael Kerr put it across very plainly: “In Tyrone we believe the GAA is very important. That means we take it seriously and that in turn means we don’t allow things just to muddle on or happen by accident.”

“A very good example of that is that Garvaghey, the place where we’ll launch our Plan. It’s now going into its sixth year of operation, but, away back in 2007, was just an ambitious Action in our Five-Year Plan of the time. That’s what good planning is about – identifying a need, developing a vision and then making it happen.”

There’s an open invitation to the Gaels of Tyrone to come along to the launch as a key event in the County’s GAA calendar. It’ll be short, sharp, focused and very important!

‘Is fearr réchonn ná iarchonn … Foresight is better than hindsight’