The Irish News Ulster All Stars 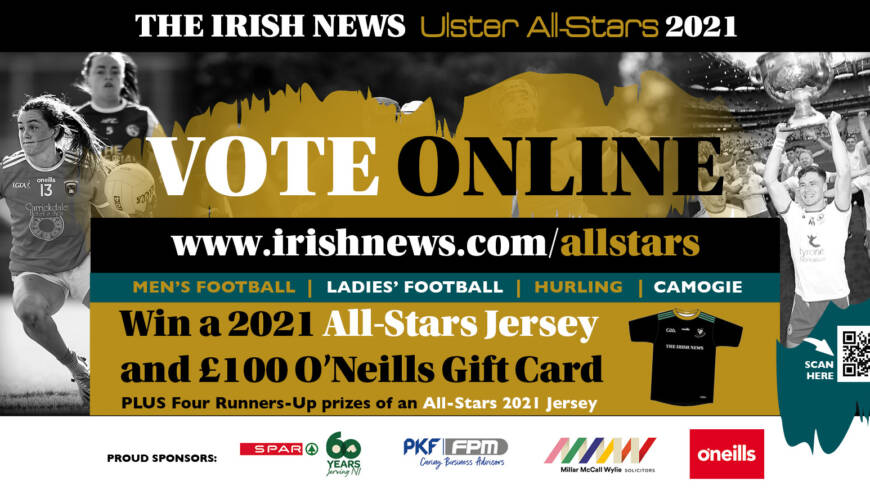 PLAYERS WHO LIT UP A BLEAK TIME TO BE HONOURED
– Voting now open. The Irish News Ulster All Stars are back for 2021

It was a year when the healing power of sport was once again in evidence. As footballers, hurlers and camogs battled for Ulster and All-Ireland glory, stories were written, stars created and memories made.

Teams and individuals stepped up when tested, like the Tyrone team which was floored by COVID-19, who picked themselves up, stormed the Kingdom and swept aside the best of the west to land an unlikely All-Ireland title.

The 2021 Gaelic Games season offered hope and now it is time to reward those players from all codes who have provided so much joy and entertainment throughout the year.

The Irish News Ulster Allstars, proudly sponsored by Millar McCall Wylie, PKF-FPM, Spar and O’Neills Sportswear, acknowledge excellence across Gaelic football, hurling and camogie and readers now have the chance to name their best 15 in each code.

Over the coming days, The Irish News Reporters and Correspondents will help readers select their teams by providing reminders of some of the outstanding performances of the year in football, hurling and camogie.

“Last year was a first for the Irish New Ulster Allstars as we named teams for football, hurling and camogie for the first time and I am delighted that readers will again get to chance to select the most deserving men and women to fill those teams this year.

“In highlighting the top performers across all four codes, we celebrate the role sport has had to play in bringing us back to something close to normal. Our readers love to follow every twist and turn of the Gaelic Games and I have no doubt we will see a great response to this year’s Allstar initiative.”

“The Irish News Ulster All-Stars have grown into one of the most prestigious fixtures on the Irish sporting calendar. This year we saw outstanding performances from players across all four codes, allowing us to enjoy an outstanding championship season despite a very challenging year. I would like to take this opportunity to thank our sponsors O’Neills Sportswear, Spar, PKF-FPM and Millar McCall Wylie for their support.”

Voting has now opened. VOTE for YOUR Football, Camogie, and Hurling All-Stars by post or online at www.irishnews.com/allstars Voters will be entered into a draw for a 2021 All-Star jersey and an O’Neill’s gift card to the value of £100. There will also be four runner-up prizes of an Irish News Ulster All-Star jersey.