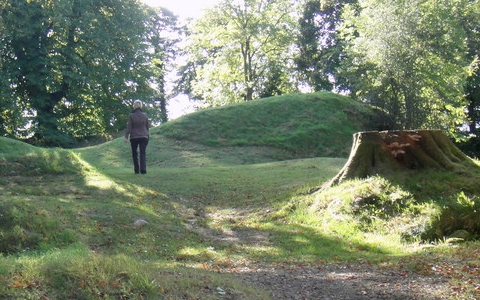 One of the features of Garvaghey will be an outdoor events/performance space inspired by the historic crowning place of the O’Neills at Tullyhogue. This space will sit in the heart of the building’s ‘Celtic T’ shape and close by we hope to site our version of the legendary O’Neill’s crowning stone. The master map-maker Richard Bartlett drew a map of ‘Tullogh Oge’ in 1602 on which he wrote: “On this hill the Irish create their O’Neale.” The ‘creation of the O’Neale’ followed an established ritual. After the Primate’s Mass, the new O’Neill vowed to rule by Brehon Law and to give up the throne when he was too old or frail to rule. A golden shoe was thrown over his head by his principal sub-chief, O’Cahan to signify good luck and to show that he would continue in the footsteps of his ancestors who had held the title. O’Hagan, the hereditary guardian (and who lived in what we now call Tullyhogue Fort) would then put the shoe on O’Neill’s foot and the Bell of St Patrick would be rung. That is part of the heritage of Tyrone. So when we say Garvaghey is about gaelic heritage as well as gaelic games, we’re serious about it.