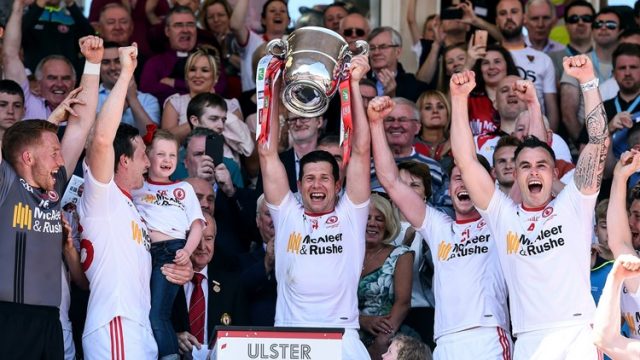 Ulster Senior Football Final
TYRONE 2-17 DOWN 0-15
By Orla Bannon at Clones
Tyrone unleashed their superior firepower on Down in the second half to comfortably retain their Ulster SFC title at Clones.
Mickey Harte’s side led 0-7 to 0-5 at the end of a tight, edgy first half but they reeled off seven unanswered points in the third quarter to completely take the game away from the Mourne county.
Two goals in the last 15 minutes from Ronan O’Neill, the second a superb chip over goalkeeper Michael Cunningham, sealed a 15th Anglo Celt triumph for Tyrone.
Despite impressive wins over Armagh and Monaghan, Down were big underdogs heading into the decider but gave it everything in the first half.
They were undone by some wrong options once they got inside Tyrone’s ’45’ and Tyrone’s disciplined tackling coughed up very few easy chances for Down to work their way into the game.
Tyrone led 0-6 to 0-2 after 21 minutes with centre-back Padraig Hampsey scoring twice along with Peter Harte, Mattie Donnelly and Niall Sludden.
Out-of-sorts Sean Cavanagh kicked a few chances away and sensibly fisted his next opportunity over the bar, with Shay Millar and pacey Ryan Johnston replying for Down.
Eamonn Burns’ side’s best spell was in the 15 minutes before half time.
They hit three points in a row from Niall Donnelly, Darragh O’Hanlon (free) and Conor Maginn to make things interesting.
It was a case of what might have been when O’Hanlon flashed their best goal chance wide of the far post in the 34th minute with Tyrone leading 0-6 to 0-5.
Deep in stoppage time Donnelly fisted over his second – Tyrone’s first point in 18 minutes – after good work by Mark Bradley.
Down will have been delighted with their first-half efforts and felt they were still well in the game – but they had no answer once Tyrone went through the gears at the start of the second half.
Only 10 seconds had elapsed when David Mulgrew stretched their lead.
Sub Declan McClure – who replaced the black-carded Kieran McGeary – had a huge influence around the middle as Tyrone devoured the Down kickouts.
Cavanagh, Mark Bradley (two) and the McCann brothers were all on target as Tyrone ruthlessly took the game away from Down, who were appearing in their first Ulster final since 2012.
The loss of Kevin McKernan for a black-card offence on Sean Cavanagh after 42 minutes was a huge blow to Down.
Caolan Mooney and Ryan Johnston scored their first points after half time mid-way through the second half.
That reduced the deficit to 0-14 to 0-7 but O’Neill’s first goal killed any brief hopes of a comeback.
McClure and Mattie Donnelly combined with the latter finding O’Neill at the back post, and he tucked his chance away perfectly in the 56th minute.
Nine minutes later he scored with a majestic chip after latching on to Darren McCurry’s brilliant crossfield ball.
From that point, Tyrone were out-scored by five points to two but their thoughts had undoubtedly turned to an All-Ireland quarter-final in three weeks time, while Down await Monday morning’s draw.
Scorers for Tyrone: Ronan O’Neill 2-0, Mattie Donnelly, Padraig Hampsey 0-3 each, Sean Cavanagh, Peter Harte 0-2 (1f) each, Mark Bradley 0-2, Tiernan McCann, Conall McCann, David Mulgrew, Niall Sludden, Declan McClure 0-1 each