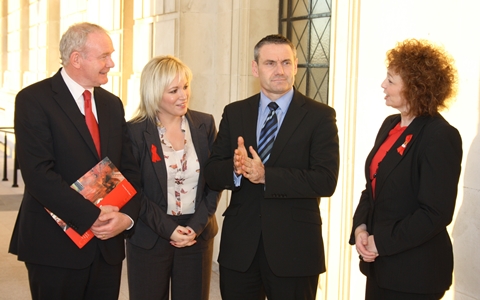 GAA Welcome funding package for Tyrone GAA centre at Garvaghey
Tyrone GAA received a huge boost today with news that it is to benefit from £1.095 million grant aid funding to complete the new training and administration centre at Garvaghey. This morning Tyrone county chairman Ciaran McLaughlin accepted a letter of offer for £595,000 from ARC North West through DARD, towards a state of the art 3G pitch which will be constructed at the Garvaghey site in the new year. That brings the total contributed by DARD to £850,000 as part of two separate funding schemes.
After lunch he led a delegation of Tyrone GAA officials to Stormont where he met with Joint First Minister Martin McGuinness, DCAL Minister Caral Ni Chuilin and DARD Minister Michelle O’Neill . At the meeting Tyrone GAA where informed by DCAL Minister Caral Ni Chuilin that they were to receive £500,000 of grant aid towards the project.
Tyrone Chairman Ciaran McLaughin said, “The ARC North West funding will be invested directly into the construction of a 3G pitch at Garvaghey while the DCAL grant will help us to complete that part of the project and contribute to other areas under construction. These grants mean that Tyrone GAA will be able to provide state of the art sports’ facilities. It not only provides with a truly magnificent centre for use within Tyrone but offers us the chance to open up our facilities for our sister organisations Tyrone Ladies, Tyrone Camogie and Rounders. The Ulster Council will also have use of the facility for strategic events all year round.
“I would like to thank the officials from ARC NW, DARD and Minister Michelle O’Neill for the prompt and efficient way in which our applications were processed. I would also like to pay tribute to Caral Ni Chuilin and DCAL who have been supporters of the project since day one. These monies are huge endorsement for the work we are planning to do at Garvaghey and I have no doubt that it will provide a long lasting legacy for the people of Tyrone and indeed across Ulster.”
The Ulster GAA President Aogán Ó Fearghail also welcomed the joint announcement by Minister Michelle O’Neill and Minister Cara McCullin of funding of £1.095 million for the Tyrone GAA Centre of Participation at Garvaghey.
Ulster GAA President Aogán Ó Fearghail said, “This is a significant investment in Ulster GAA’s flagship regional centre in Garvaghey, County Tyrone. The significant funding announcement by both Ministers today will enhance the funding package already put in place by both the GAA and Tyrone GAA. Over £4million of funding from the Gaels of Tyrone in the guise of Club Tyrone has been raised to invest in this fantastic facility. This shows the outstanding commitment Tyrone GAA and its members have to our Association.
“I commend both Ministers and their advisers, the Tyrone County Officers, Ulster GAA Provincial Secretary Danny Murphy and our Public Affairs staff on their work to bring this issue to conclusion over the last eight weeks.
“I now look forward to the opening of the Centre in 2013, which will be a proud day for Tyrone, for Ulster and the entire GAA.”