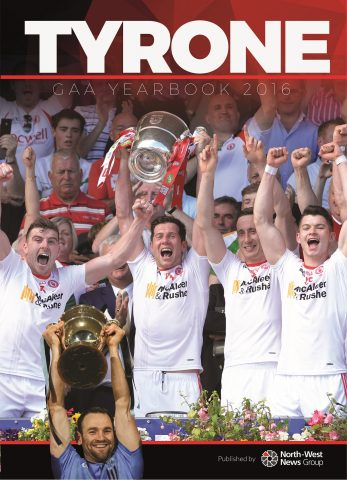 It’s here, the Tyrone GAA Yearbook 2016 is now available in your local newsagent throughout the County.
GAA followers will be able to reflect on the 2016 season with a first Ulster title success for Tyrone in six years undoubtedly topping the highlight list.
The big win at Clones in July ensured a great sense of satisfaction from a year that also saw the Red Hand county capture the National League Division Two title and a record fifth consecutive McKenna Cup.
While the aspirations towards All-Ireland glory were dashed against Mayo in the All-Ireland Quarter Final, make no mistake that Tyrone will be back challenging at the top level in 2017 and beyond.
Of course, those Tyrone senior football triumphs aren’t the only fond memories that we will take from the year that has passed.
Your club may have won a league or championship title in football, hurling, ladies football or camogie. For others, it may have been a county, provincial or national triumph in Scor, Scor Na nOg or handball.
Brought to you by the Ulster Herald, Strabane Chronicle and Tyrone Herald, the Tyrone GAA Yearbook will bring back many happy memories of the 2016 season at club and inter-county level – whatever your personal highlight.