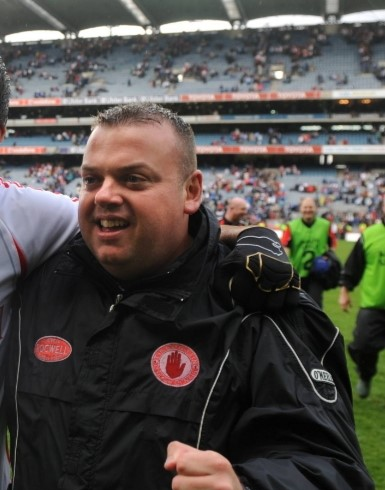 During that period Fergal helped Tyrone win 2 All Ireland football titles in 2005 and 2008 as well as 3 Ulster Senior Championship titles. Fergal played in goals for his beloved Augher and went on to manage and train Augher, as well as helping to manage various youth teams over many years.

Fergal was employed as a Games Promotion Officer, working within schools for Tyrone GAA from July 2003 until the start of his illness and was one of the longest-serving current Schools Coaches. Fergal loved the GAA and he went on to manage and coach several Club sides both within Tyrone and outside the County.

Coiste Chontae Thír Eoghain, wish to extend its sincere sympathy to Fergal’s wife Roisin (nee Mc Anenly), daughers, Aine and Aoife, his sister Lisa and his mother Maura; he was pre-deceased by his Father Frank (RIP)

Tyrone County Chairperson Michael Kerr, said this evening that,” a giant of the GAA in Tyrone has gone to his eternal reward. For one so young to have achieved so much is testament to a great Gael.  Fergal was a true gentleman in life even in the white hot heat of championship battles. A very private person, the manner in which he bore his illness over the last twelve months marks the magnitude of the man.  His legacy is not alone the two All-Ireland winning teams but the influence he had on all those who had the privilege to be coached and managed by him, in clubs and schools. While our loss is massive, it is insignificant compared to that of his family and close friends.”