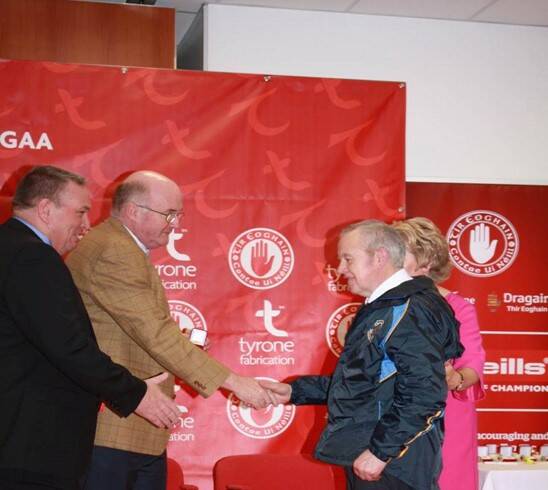 Gerard is Honorary Club President and over his many years of  commitment to the Club he managed teams at all ages for his beloved Aireagal. Family members playing on the teams he managed got No Special treatment, If you had to be taken Off well Off you came. No Hesitation! He was the Club’s County Board delegate.  Everywhere Gerry went he left his mark, quick of wit and pleasant in manner he ensured that everything ran smoothly form caretaking and groundsman duties at Dunmoyle to acting as umpire, to stewarding and even washing club jersies.

Visitors were always guaranteed a smile and a warm welcome at Cardinal MacRory Park.  The Aireagal jersies, including a proud and unique Ulster-winning Club jersey, lay easily on Gerry as he looked down on the Mass Rock, finally at rest and at home. Gerry had the concept of fast transition nailed long before any of our modern pundits. The advice to “take one solo and pass the ball or you will end up in Brockagh” is straight and clear, easily understood.

Gerry received his richly deserved Gold CREDO mark in 2018 form Uachtarán CLG, John Horan and Carhaoirleach CLG Thír Eoghain, Michael Kerr marking 50 years of service. Maith thú.  The presence and support of Gerry and his brother Ray at Scór will always bring a smile.  Gerry was Club Oifigeach Cultúir for close on 40 years and his sterling work here certainly put Aireagal on the map. Titles at solo singing, question time, recitation and instrumental music and a healthy constant presence in Scór na nÓg and Scór Sinsear were because of Gerry and that phone call or request, well maybe more than a request!  The highlights came in 2000 at the Ulster Hall with Ballad Group All-Ireland success and again in Killarney in 2012 with a Novelty Act All-Ireland.  And, the dual member with both acts is Dermot, Gerry’s youngest brother.  Faith, Family and Fatherland, we will miss you.

Gerry receiving his Gold CREDO award at Garvaghey with Michael Kerr, John Horan and Róísín Jordan who initiated the awards.