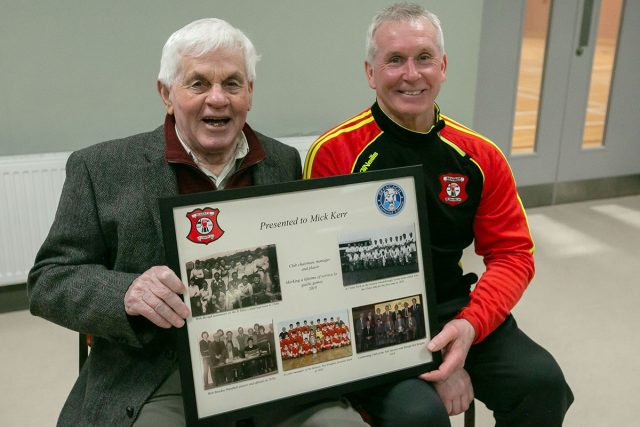 Tyrone Gaels everywhere would like to extend their sincere condolences to the Family and friends of the late Mick Kerr, Drumnakilly, Beragh who passed away on Sat 30th Jan at the age of 87 years. R.I.P.
Born in April 1934, Mick made an immense contribution to both Gaelic Football and Handball in the Beragh area for over 7o years. Mick lined out for his beloved Beragh Red Knights from 1952 up until 1969. During his career Mick played for Beragh in two Minor County Finals back in 1950 and 1952. Mick also lined out for Beragh in the Tyrone Senior Championship Semi-final in 1955 and helped Beragh to win the St Enda’s Cup in 1958.
Following his long playing career Mick continued his love of Gaelic Football going on to manage Beragh in 1975 and 1976, he was back in charge of the Football team again in Centenary year in 1984. Mick helped Beragh to win their only Grade 1 Youth Football title as joint manager of the Beragh Juvenile side who won the County title in 1985. Along side Mick on the side-line that day were P.J. McClean and Brian Donnelly.
As an administrator Mick also played his part and was the Football Club Chairperson from 1965 to 1970. For many around Beragh Mick will also be fondly remembered for his huge contribution to the promotion of Handball. Mick was a very proficient Handball coach and went on the coach many of the young Handball stars from the Brackey Club to both County and Provincial titles over the years. Mick also served as the Tyrone County Handball Chairperson for many years. Mick was instrumental in the revival of Handball in the Brackey Club and all Mick’s family all played the game.
At County Level Mick was so very proud of the part he played for his beloved Tyrone Senior football team.
At the young age of only 19 years Mick made the break through for Tyrone Senior Footballers helping the O’Neill County to capture their first ever historic Ulster Senior Football Championship title back in 1956.  In Tyrone’s Semi-Final win over Monaghan, Mick contributed a total of (1-1) and helped Tyrone reach the Ulster Final. As the story went Paddy O’Neill the County Secretary at the time plucked the Young Mick Kerr from the crowd and the rest is history.
In the Ulster Final of 56′ Mick lined out at corner forward and the talented dual footed young Beragh Star helped Tyrone overcome the Kingpins of Ulster the Breffni men of Cavan. The famous victory over Cavan was one of Mick’s proudest moments and having an Ulster Senior Medal was his finest achievement.
Tyrone GAA wish to express their sympathy to all the Kerr Family – his 5 Daughters and 3 Sons, Janice, Martin, Deirdre, Conor, Helen, Geraldine, Niall, and Ursula.   Mick was pre deceased by his Wife, Marian.  Kerr from Drumnakilly, Beragh
Recently Mick was honoured at a special event organised by the Beragh Red Knights club and in attendance was many of his family members, former teammates, club officials and close friends. A very justified occasion to celebrate the huge impact Mick made on his local community and Parish.
Ar dheis Dé go raibh a anam dilís

Seamus Boyle Beragh Chairperson presented a Special Tribute to Mick RIP, at a Club Function back in March 2020