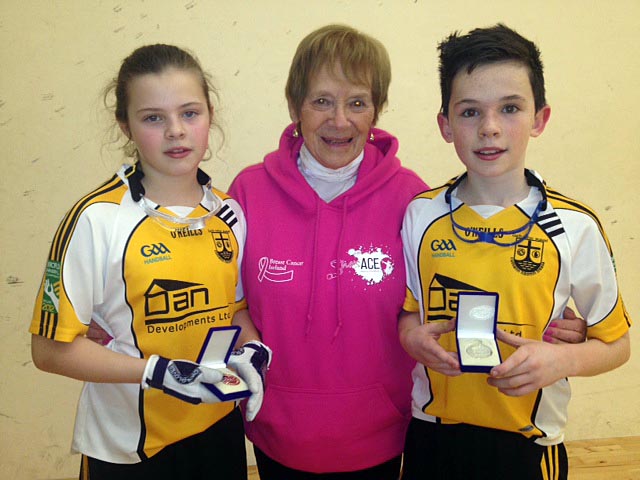 Loughmacrory win All Ireland Gael Linn
Tyrone GAA Handball continues to go from strength to strength and the All Ireland Gael Linn Championships emphasised the point today in Mayo as the county’s two young club teams from Loughmacrory and Breacach won through to contest the final of the national tournament with Loughmacrory enjoying a terrific All Ireland title win on the day.
The event, which saw the winning two club teams from each province, brought a winning start for Dara Curran and Mairead Fox against Tuamgraney of Clare. In game one, Mairead had to battle from behind to finish all square with Roisin Minogue at 11-11 before Dara delivered a fine display to defeat Conor Downes 17-5. A 19-6 win then followed by Dara and Mairead in the doubles match as they booked their All Ireland semi final place with a 47-22 win overall.
In the All Ireland semi final the club duo then faced a highly regarded young Leixlip (Kildare) team. Mairead was really up against a top notch performer as she faced World 11 & Under champion from 2012, Leah Doyle, in the opening game but played fantastic in the timed game to lose out by just 6-5. Dara Curran then produced possibly his finest display of the day to score an impressive 24-3 win over Sean Muddiman and they went on to claim their All Ireland final place with a 20-6 win in the doubles match, to win overall by 50-14.
Meanwhile, in the other half of the draw the other Tyrone team who had qualified for the All Ireland stages were producing superb form to claim their place in the All Ireland final. They firstly had to deliver an excellent display to beat Mallow of Cork by . In game one Elizabeth McGarvey got off to a flying start with a most impressive win 31-3 against Sarah Kelly. Caolan McCartan battled resolutely then against talented young star Cian O’Driscoll, losing out 15-6 and when the doubles finished 19-10 to Mallow, it was still enough to see Breacach go into the semi final on a 47-37 scoreline overall.
In their semi final match, Breacach were excellent to serve up a fantastic win over Galway’s Micheal Breathnach’s and thus for the second year running, the Gael Linn event brought an all-Tyrone final.
That title decider saw Elizabeth McGarvey and Mairead Fox produce a superb contest in the opening game with Elizabeth just winning out 9-4. Dara Curran had a great battle early on with Caolan McCartan with super offensive play and retrieving by both players but Curran’s high rate of corner kill-shots saw him open up and win 22-4 overall. In the doubles Dara and Mairead again played as they had all through the series and were in excellent form, winning that game 18-7 and thus claiming their first All Ireland championship medals on a 44-20 overall score.
A great day overall for Tyrone’s young handballers again at National level and further emphasises how bright the future is in the sport for the Red Hand County, this being the second successive year of success for the county in this prestigious event.


Daly falls in Intervarsities decider
Carrickmore’s Caolan Daly exhibited an impressive return to form last weekend at the All Ireland Intervarsities Championships where he won his way through to the Senior Open Final. Daly lost out in the end to one of the top ranked senior players, Martin Mulkerrins, by 21-10, 21-20 in a fascinating contest, having overcome Cork’s Pa Herlihy in the semi final stages. This is one of the most prestigious titles in offer in Irish handball, the previous winners list making impressive reading. Ciaran Curran won the Mens Open Singles crown four times from 1993-1996, while Tyrone have also had a host of players over the years who have been on winning All Ireland Intervarsities Team Championship sides. Caolan now challenges for the Tyrone Attic Stairs Open Senior Doubles championship, where he will team up with his brother, Darragh, in tonight’s semi final in Beragh at 8pm against Conor McElduff and Johnny Woods. That promises to be an intriguing tie in Beragh, and will be preceeded by the Junior Doubles semi final, in which Loughmacrory’s Kenny Curran and Finbar Fullen face Breacach’s Eamon and Seamus McCrory. Daly also has a weekend engagement in the Ulster Intermediate Championship semi final as he bids for a first win in that grade and on current form, could prove difficult to stop.

Tyrone showing well in Ulster Championships
Tyrone GAA Handball players have really been showing up well in this year’s Ulster 40×20 Championships in the adult grades, with the Juveniles to get underway in just over two week’s time.
Last weekend saw a double Ulster Minor Singles Championship success for the county in the Mens and Ladies Minor Grades as Johnny Woods collected the Boys Minor crown with an impressive 21-10, 21-9 win over Monaghan’s Eugene McGeogh in the Ulster minor decider in Gort na Mona, Belfast. Maeve McElduff then added the Ladies Minor championship honours as she denied her county colleague, Aoife Kelly, by 21-12, 21-5 in the Ladies Minor final.
A host of Tyrone players continue in action in the Ulster Championships this weekend. Conor McElduff and Gabhainn McCrystal both have strong credentials in both the Under 21 singles and when they team up in the doubles Championship. Both are in action in the singles semi finals at Loughmacrory this Saturday against Antrim opposition. In the Junior B Doubles Championship, Eamonn McCrory will contest the Junior B Singles semi final this Saturday at 12pm in Eugene Quinn, Armagh. McCrory will also be fancied to go well in the Junior B Doubles where he teams up with Jack Campbell on Saturday 16th February at the semi final stages.
In the Junior Singles Championship, Tyrone will definitely have a player in the 2014 final as Ryan Daly, following an eye-catching win over Terry McElvaney (Monaghan), will now meet his club and county colleague, Patrick McCrory, in the semi final stages this Saturday. Daly and McCrory are also in the semi final of the doubles of that series on 16th February, with Barry Devlin and Pol Clarke also still in contention in the Junior Doubles Championship.
Shane O’Neill will put his strong Intermediate Championship credentials on the cards on Saturday also as he travels to Tydavnet to face Cavan’s Patrick Clerkin in the semi final stage while Caolan Daly meets Cavan’s James Brady in the other semi final.
Conal Curran and Martin Toner have been in good form and will contest the 35+ Mens B Doubles final on 2nd March against Cavan while Tyrone have dominated in the Masters B Singles championships, having defeated Antrim and Down opponents at the quarter final stages to set up an all Tyrone semi final line-up. Chris Curran will face Seamus McCrory in the first semi final on Saturday evening in Beragh while Mark McCartan and Rory Grogan will meet in their semi final in Loughmacrory. Rory Grogan and Seamus McCrory are also into the semi finals of the doubles in that grade on 16th February.
Niall Kerr has had a top class season in Tyrone to date and will bid for glory in a highly competitive Silver Masters A Singles Championship, his challenge beginning this Saturday. Kerr will take on Antrim’s John McGarry in Clann Eireann on Saturday at 11am while Tyrone are also guaranteed a finalist in the Silver Masters B Singles Championship. Doubles partners, Kenny Curran and Finbar Fullen had solid wins over Monaghan opposition last weekend and will now meet on Saturday evening in Loughmacrory in the semi final stages. That duo are also set to meet Monaghan’s Eugene McGeogh and Peter Duffy in the semi final of the doubles on 16th February. Conor Kerr will also be in action at Clann Eireann on Satrurday at 12pm as he faces Paddy Roberts of Antrim in the semi final of the Golden Masters A Singles championship.
Darragh Daly and Caolan Daly will represent the County in the Ulster Mens Open Doubles Championship when they faceAntrim’s Ricky McCann and Paul Graham in the semi final of the series on February 22nd. Woods will also team up with Ryan Mullan and will be a fancied partnership in the Ulster Minor Doubles Championship final on 2nd March.
Ulster titles already won by Tyrone players include Ciaran Curran (Masters A Singles Champion), Ciaran Curran and Chris Curran (Masters A Doubles Champions), Lisa McAleer (Ladies Intermediate Singles Champion). 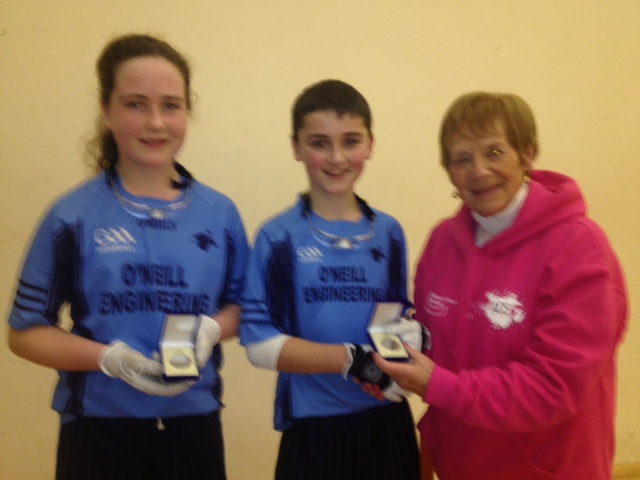