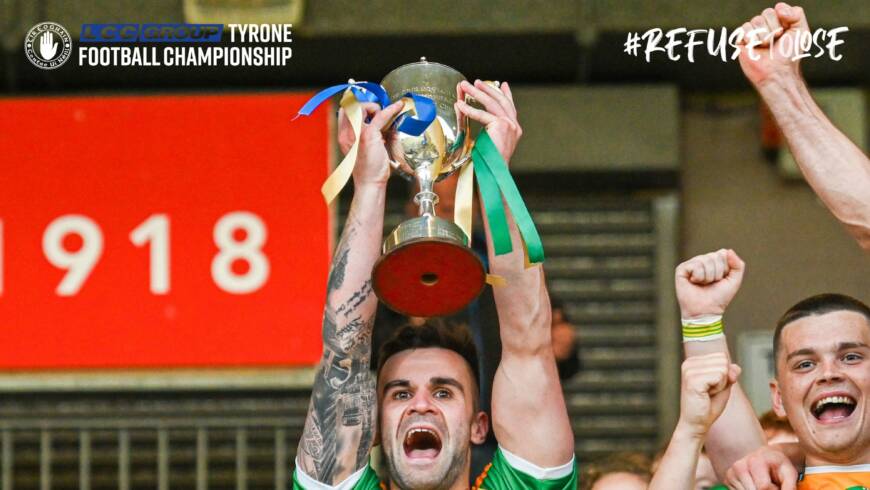 LCC GROUP TYRONE CHAMPIONSHIP
It’s another big week in the LCC Group Tyrone Championships, with the Senior and Intermediate title races getting under way.
The challenge for the IFC title begins at Fintona on Thursday, when Killeeshil take on Clogher, and on Friday it’s the clash of Aghaloo and Moortown at Stewartstown.
Four attractive ties will be played on a busy schedule throughout Saturday, with two venues hosting double-headers.
Naomh Eoghan and Beragh get the action under way at Loughmacrory, ahead of the meeting of Tattyreagh and Gortin.
Later, O’Neills Healy Park is the venue for the clash of Strabane and Greencastle, followed by Aghyaran game against Owen Roes, with the prospect of a personal duel between All-Ireland winners Ronan McNamee and Cathal McShane.
On Sunday, Plunkett Park will stage the tie between Stewartstown and reigning Junior champions Kildress.
And at the same venue, the 2021 Tyrone Senior Championship gets under way with the preliminary round tie between Dromore and Ardboe.
The other preliminary round game takes place later on Sunday, with Derrylaughan’s meeting with Moy in a repeat of last year’s first round.
For those attending, tickets must of pre-purchased online, and for those unable to be there, all games can be viewed live via Tyrone GAA TV’s live streaming service. Last weekend Gaels all over the world tuned in to watch the action.
By tyronepro Mon 27th Sep