Woods and Mullan bid for All Ireland Minor clean sweep 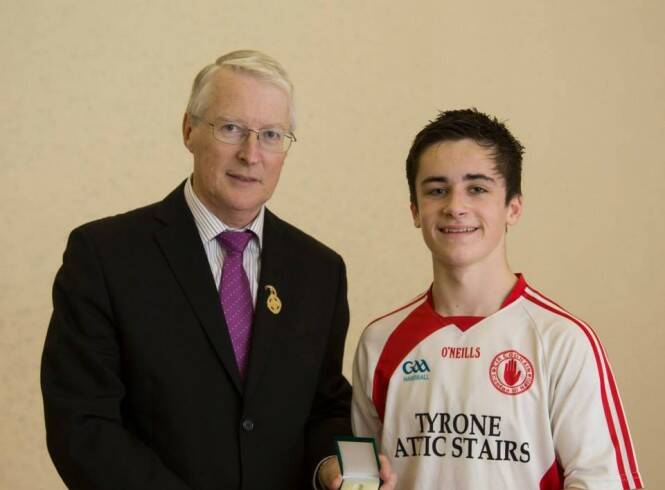 This Saturday in St. Coman’s, Roscommon, Johnny Woods and Ryan Mullan will team up against Clare in the All Ireland Minor Doubles Championship Final. Of course Woods made his own piece of history when becoming just the third Tyrone player, and first from his club, to win the All Ireland Minor singles Championship title a fortnight ago. If winning the doubles this Saturday, Woods will become the only Tyrone player to achieve the clean sweep in the grade. The duo were highly impressive in the Ulster success and against Meath in the All Ireland semi final. They will travel as part of the highly prestigious All Ireland Open doubles final programme in St. Coman’s, Roscommon, this Saturday at 1pm, with the action again to be streamed live on www.gaahandball.ie.
Elsewhere, the Tyrone Under14/15 Team will travel all the way to Tulla (Clare) for the All Ireland semi final and finals day on Saturday 5th April also. That team comprises Conor Kelly, Antoin Fox, Ronan Curran, Shane Grimes, Colm Logue and Tiarnan McAleer and they will face Kilkenny in the semi final stages with the winners to meet either Clare or Mayo in the final on the same day.
That will conclude all 40×20 Championship action for the season from a Tyrone perspective with the last remaining event of the small-court campaign coming in the Irish Junior Nationals in clare. That prestigious Juniors tournament takes place on 12th/13th April with qualifying games down for this Sunday 6th April. Tyrone will again have a strong hand to play in many of those grades with a huge entry across all grades. we will look at the details of this event in next week’s edition.
Double GAA Handball All Ireland Juvenile success for Tyrone
Tyrone GAA Handball secured a further two GAA Handball All Ireland Championship titles at the Juvenile Finals day in Clare at the weekend. Carrickmore’s combination of Cormac Munroe and Darragh Canavan defeated Tipperarys John McGrath and Sean Adam to claim the Boys Under 14 Doubles crown. Cormac and Darragh have been in superb form all season and again exhibited excellent resolve and skill to power their way to a first All Ireland championship gold medal on a 15-10, 15-5 scoreline.
A brilliant second GAA Handball All Ireland Juvenile Championship title came through Breacach’s Sean Kerr, who became just the third player ever from the County to win the blue ribband Under 16 Singles Championship crown. A fantastic display from Sean saw him defeat Tipperary’s Jerome Cahilll in the final in Clarecastle by 21-18, 21-10. This adds to his clean sweep of All Ireland Under 14 singles titles in 2012 and certainly continues his stamp as one of the most exciting young talents in the game.
Breacach’s Eilise McCrory put up an excellent display but has just lost out in the All Ireland final of the Girls Under 16 singles championship. Eilise was in flying form early on and won the opening game against her highly regarded St. Coman’s opponent by 21-15 but a 21-10 defeat in the second game was followed by a 11-6 tie break defeat to Roscommons Fiona Tully. Following an impressive run of form in Ulster and in her All Ireland semi final, Carrickmore’s Ciara Mullan has lost out at the final hurdle of the Girls All Ireland Under 14 Singles Championship. Clare’ Bridin Dinan proved a bridge too far for Ciara, who put up a very solid display but lost out on a 15-10, 15- 3 scoreline
The GAA Handball All Ireland Under 16 Doubles championship final saw Tyrone represented by Breacach’s Matthew McCartan and Carrickmore’s Pauric Mullan. The duo had displayed tremendous resolve to come through tough Ulster championship and All Ireland semi final games and they produced another very gallant display in Saturday’s final in Clarecastle before falling to Tipperary’s Colin Ryan and Jason Englishby 21-15, 21-12. Breacach’s Aaron Owens and Tiarnan McCrystal faced Tipperary’s Ceallach Hennessy and Liam Bradshaw in the Boys Under 17 Doubles championship final and once again put up a terrific battle before losing out on a 21-19, 21-19 scoreline on the day.
At adult level, Breacach’s Seamus McCrory and Carrickmore’s Rory Grogan teamed up to great effect in this season’s All Ireland Masters B Doubles championship and travelled for the title decider to Leixlip but lost out to Tipperary’s Martin McInerny and John Lee in the end. The duo put up a cracking display against the Munster Champions, who were narrow losers in the World Final in 2012 in this grade and again in the All Ireland final last term and claimed the honours by 21-16, 21-11.
Tyrone’s last All Ireland Championship final appearance of the weekend was in the Under 21 Doubles decider in Tinryland (Carlow) as Conor McElduff and Gabhain McCrystal took on Cork’s Shane Hedigan and Daniel Relihan. Another epic tussle developed again for McElduff and McCrystal and in the end were unfortunate to lose out in a tie-break. Having lost the opening game by just a single ace, at 21-20, the Tyrone lads battled back to level the tie with a 21-18 win in the second but were unable to sustain that momentum going into the deciding game, losing out in the end 21-12.
Tyrone GAA Handball Presentations
The Tyrone GAA Handball Committee have announced double presentation evening for the Juniors and Adults in the coming month. A Tyrone Juniors Presentation evening will take place at Beragh Red Knights GAA club on Wednesday 16th April at 7pm and will see presentation of certificates, medals and trophies to all players from Under 10 to Under 17 who competed in Tyrone Attic Stairs championships and for our Ulster and All Ireland winners. The Adult Presentation Buffet and Dance will also take place in Beragh Red Knights GAA club on Saturday 9th May at 7.30pm. Tickets for the Adult Buffet and Dance are just £10 and are available from County officials. Special guests will include All Ireland and World Senior Ladies Champion, Aisling Reilly (Antrim) and last year’s US Pro Number 1, Charly Shanks (Armagh). 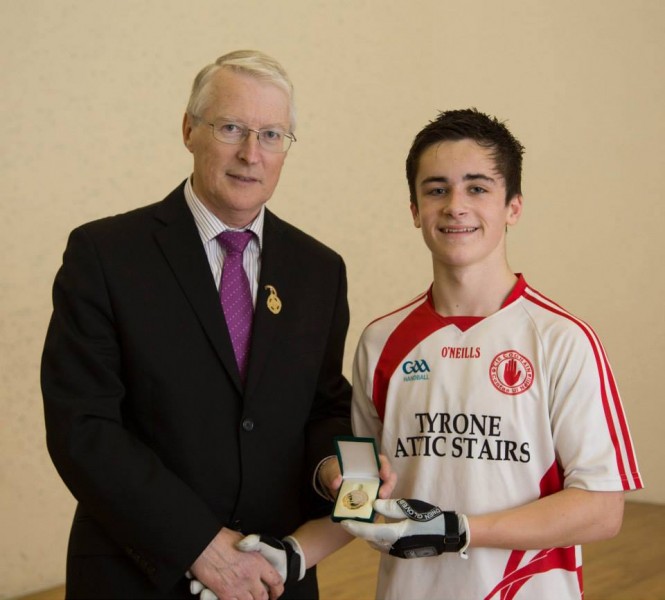 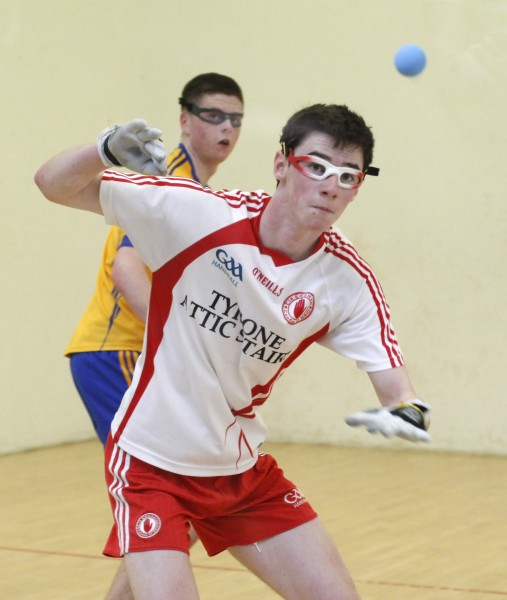 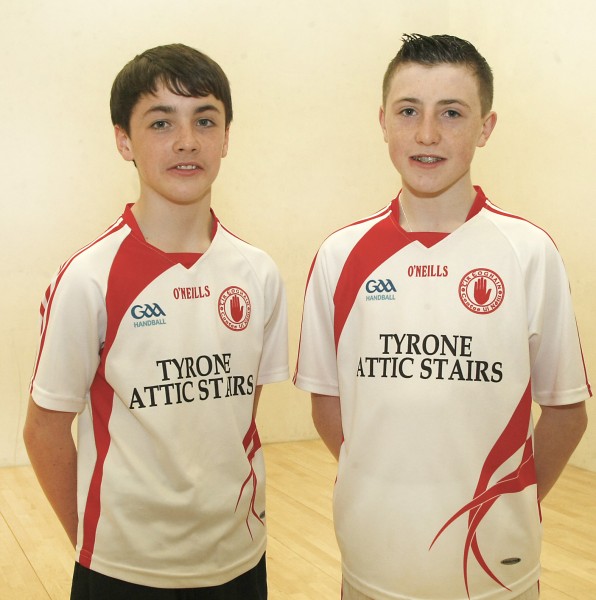